We’ve pointed out previously that the recent tax deal permanently granted a big estate-tax break to the very richest Americans while only temporarily extending credits that are crucial to low-paid working families.  Here’s another way that it treats the super-rich better than the very poor.

The deal exempts the first $5.25 million of an estate from tax in 2013 — $12.5 million for a couple — and indexes those thresholds for inflation in the future.  Meanwhile, the asset limits under the Supplemental Security Income (SSI) program — which pays subsistence benefits to 8.3 million very poor elderly or disabled Americans — haven’t increased since 1989.

The maximum SSI benefit in 2013 is $710 a month for an individual and $1,066 for a couple (assuming that both spouses qualify).  Those amounts are about 75 percent of the poverty line for individuals and 83 percent for couples.  And recipients can’t own assets — with a few exceptions, such as a home, a vehicle, and a burial plan — worth more than $2,000 for an individual (or $3,000 for a couple).  The benefit amount is updated every year for inflation, but the asset limits haven’t budged for almost a quarter century.

SSI’s stingy asset limit keeps its recipients from saving for contingencies, such as fixing the roof or repairing the car.  Moreover, SSI counts the entire value of 401(k) and other retirement accounts as assets — even though those savings are meant to last for a lifetime, not consumed all at once.

If SSI’s asset limits had been tied to inflation — like the program’s basic benefits — they’d be almost twice as high today as they actually are (see graph). 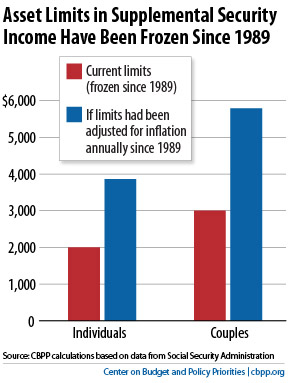 Other programs with federally determined asset limits index them to inflation.  The Supplemental Nutrition Assistance Program (SNAP) adjusts its asset limits for inflation and also disregards retirement accounts.  (Those improvements were enacted in the 2008 farm bill.)  The asset limits for low-income enrollees who are eligible for additional federal help with Medicare Part D (prescription drug) and Part B (physician and other outpatient services) premiums and out-of-pocket costs are also updated for inflation.

Another aspect of SSI that’s overdue for an update is its income disregards — the small amounts of other income (chiefly from Social Security) that it doesn’t count when determining benefits — which have been frozen for more than four decades.  Lawmakers should raise them now and tie them to future inflation.

By 2022, the estate-tax exemption — which, as noted above, is $5.25 million for an unmarried decedent in 2013 — will rise to over $6 million.  But the SSI asset limit will still be stuck at $2,000.  Very poor elderly or disabled Americans deserve better.