The Geography of Disability

About 6 percent of the nation’s working-age population receive disability payments from Social Security or Supplemental Security Income (SSI), but some southern and Appalachian states have much higher rates —over 10 percent.  While some critics see this disparity as evidence of problems with the programs, it mostly reflects a few key demographic and economic factors:
Image 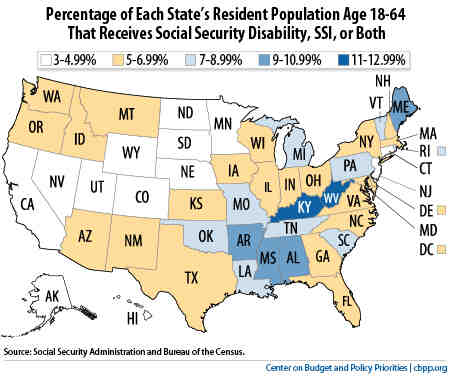 Other factors have weaker effects.  Poverty rates help to explain participation in SSI (which is means-tested) but have less bearing on Social Security disability (which isn’t).  Unemployment rates explain little of the geographic variation.  Although higher unemployment boosts disability applications, researchers conclude that those extra applicants are also more likely to be denied. Disability is a personal tragedy and economic hardship for workers and their families.  We should strive to aid these workers through job accommodations (such as special equipment to help them perform their job), universal health insurance, and rehabilitation opportunities — while also recognizing that Social Security disability insurance and SSI are a vital part of our nation’s safety net.
Related Posts:
Topics:
Disability, Social Security
PreviousFor Housing Assistance Recipients, Unbalanced Budget Deal Would Be Worse Than No Deal at All
NextPreserving Low-Income Housing Assistance in Tight Budgetary Times
Stay up to date
Receive the latest news and reports from the Center