Special Tax Breaks for Capital Gains and Dividends Strike Out

| By Chuck Marr
The new Congressional Budget Office (CBO) report on tax expenditures (credits, deductions, and other tax preferences) and a recent column by Bruce Bartlett, former adviser to presidents Reagan and George H.W. Bush, add up to three strikes against the tax code’s favorable treatment of capital gains and dividends, which face much lower tax rates than wages and salaries.

CBO estimates that the preferential rates for capital gains and dividends will cost $161 billion this year, making it the second-largest individual tax expenditure. Moreover, this figure doesn’t include another costly tax break on capital gains:  capital gains tax is forgiven at death.  So, if a taxpayer holds on to an asset until she dies, neither her estate nor her heirs will ever pay tax on any increase in the asset’s value before her death. Nor does it include the plethora of other loopholes (such as “like-kind” exchanges and “inside buildup”) that wealthy people use to defer or avoid paying even these highly discounted capital gains rates.
Image 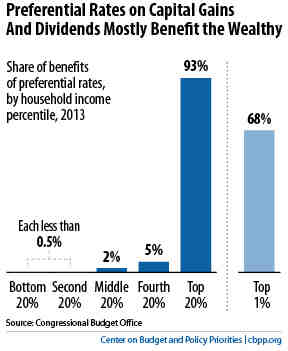 Strike 2:  Extreme Tilt to the Wealthy

Proponents of preferential rates for capital gains and dividends — and further cuts in those rates, such as those enacted in 2003 — argue that they benefit the country as a whole by stimulating business activity.  But, as Bartlett explains, research by the Federal Reserve and others on the 2003 dividend rate cut shows that it did not produce the promised gains. Similarly, research on the capital gains preference that we discuss here finds, as leading tax expert Joel Slemrod put it, that “there is no evidence that links aggregate economic performance to capital gains tax rates.”
Related Posts:
Topics:
Federal Budget, Federal Tax, Budget Outlook, Personal Taxes, Business Taxes