More than 500,000 of the nation’s poorest people will be cut off SNAP (formerly known as food stamps) over the course of 2016 due to the return in 23 states of a three-month limit on SNAP benefits for unemployed adults aged 18-49 who aren’t disabled or raising minor children, as we explain in an updated paper.  These individuals will lose their food assistance benefits after three months regardless of how hard they’re looking for work.

States can request a waiver from the federal government of this time limit in areas of high unemployment, and most have done so since the late 1990s.  Most states waived the time limit statewide during the recession and slow recovery.  But these statewide waivers are largely expiring as unemployment falls, leaving most states eligible only to waive counties with high unemployment.

This year, over 40 states will be implementing the time limit, including 23 states that will be implementing it for the first time since before the recession (see map).  Several states like Arkansas, Florida, Missouri, and North Carolina are refusing to seek any waivers even for their high unemployment areas that would continue to qualify for a waiver, exacerbating the impact of the time limit on their poor citizens. 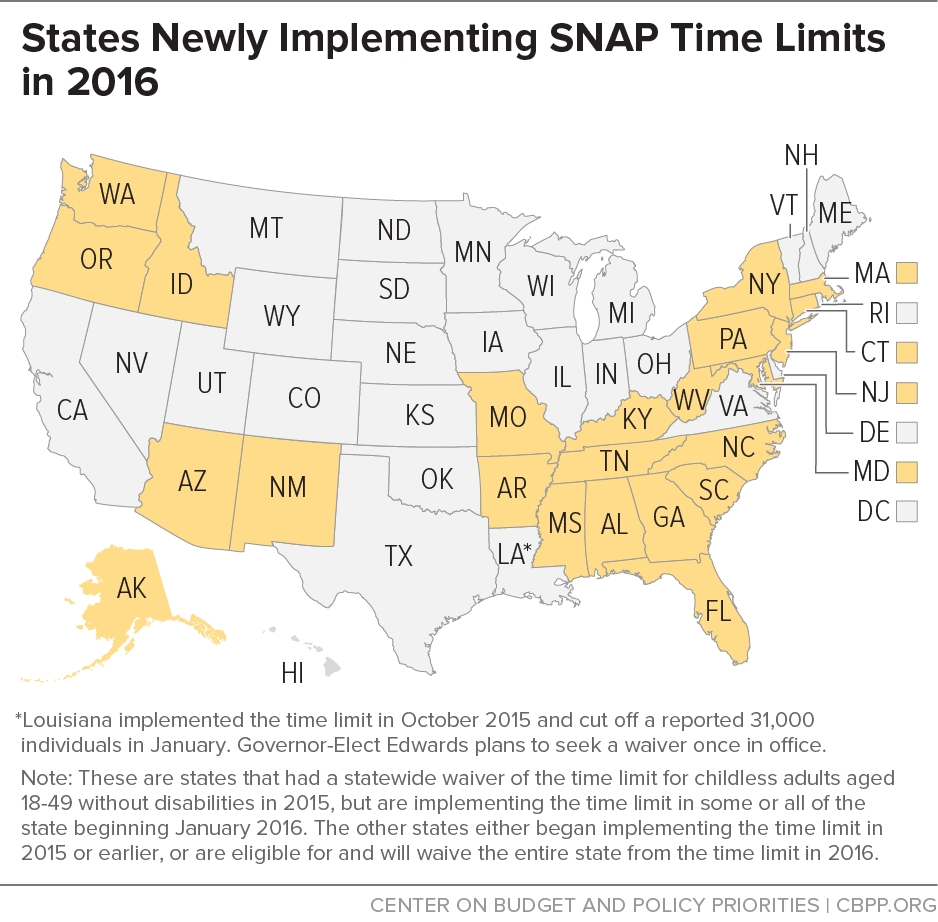 As the waivers expire or states drop waivers and the time limit returns in many states, these individuals will lose SNAP benefits after three months even if they want to work and are looking for a job but haven’t found one (or are working fewer than 20 hours a week).

Cutting people off SNAP won’t lead them to find jobs, particularly in areas with high unemployment.  Many able-bodied SNAP participants aren’t working because they can’t find a job or enough job training, or because they face challenges that prevent them from getting or keeping a job, such as health issues or homelessness.

The loss of this crucial food assistance will likely make it harder for many of these individuals — many of whom receive little if any other assistance — to afford food.

September 9, 2015
PreviousCBO: Budget Bill Would Reverse Almost All of Health Reform’s Coverage Gains
NextGreenstein on Merging Safety Net Programs
Stay up to date
Receive the latest news and reports from the Center