The number of SNAP (formerly food stamps) recipients has fallen by 2.6 million people since peaking in December 2012, new Agriculture Department data for December 2015 show.  The data confirm that SNAP is working as designed and caseloads are expected to continue falling, as our updated paper explains.

SNAP grew significantly between 2007 and 2011 as millions more people became eligible due to the Great Recession and lagging recovery; participation among those eligible also rose.  But SNAP caseload growth slowed substantially in fiscal years 2012 and 2013, and then, after peaking in December 2012, caseloads fell by about 2 percent in 2014 and another 2 percent in 2015.

In more than 40 states, the number of SNAP participants was lower in December 2015 than in December 2012.  The states with the biggest drops include Maine, Kentucky, Vermont, Kansas, and Indiana (see map).  SNAP caseload growth seems to have ended in almost every state by last December.

Spending grew during and after the recession for two reasons: the greater number of SNAP participants and a temporary benefit boost from the 2009 Recovery Act.  Similar to the caseload trend, however, SNAP spending as a share of the economy (gross domestic product, or GDP) fell in both 2014 and 2015, as the Congressional Budget Office (CBO) and other experts expected.

As the economic recovery continues and fewer low-income people qualify for SNAP, CBO expects SNAP spending to fall further in future years, returning to its 1995 level as a share of GDP by 2020 (see chart).  Thus, SNAP isn’t contributing to the nation’s long-term budget problems. 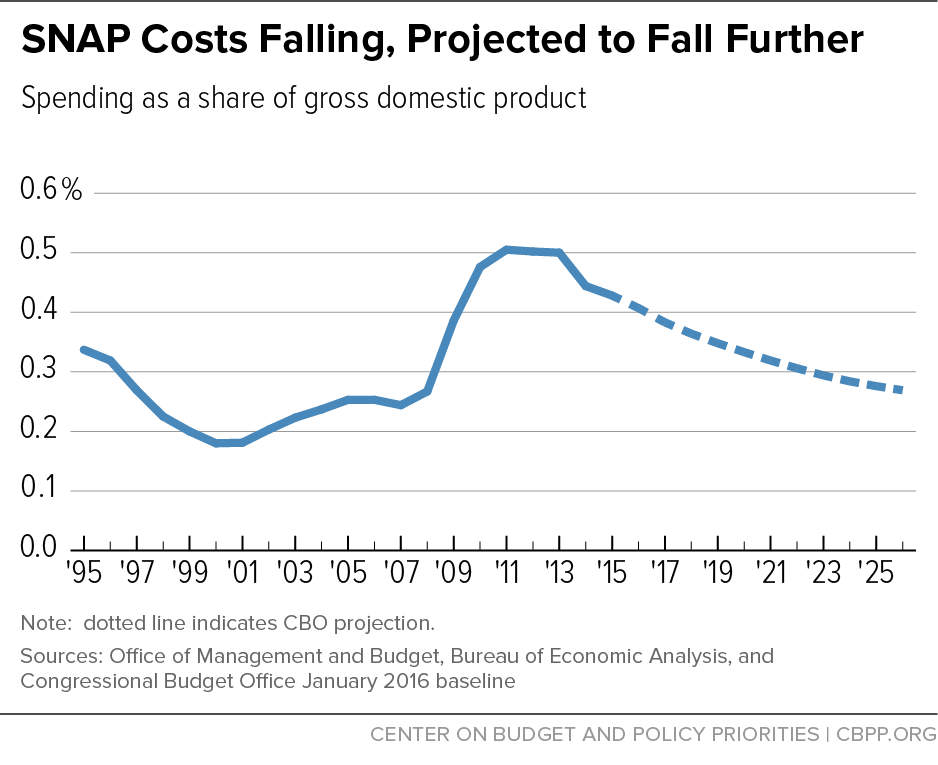 SNAP caseload drops are good news, to the extent that they reflect improving economic circumstances among low-income households.  However, an austere provision in current law affecting some of the nation’s poorest individuals will also reduce SNAP caseloads and costs.  Over the course of 2016, at least 500,000 and up to 1 million people will lose SNAP due to the return in many areas of a three-month limit on SNAP benefits for unemployed adults aged 18-49 who aren’t disabled or raising minor children.

Another key issue is whether states will maintain their progress in reaching eligible households.  SNAP caseloads grew during the recession both because more people qualified for help and because a larger share of eligible people applied for and received benefits.  To the extent that administrative barriers make it harder for people to get SNAP, state and federal policymakers should address the problems.

June 26, 2018
PreviousNew Book Calls for Better Targeting of Federal Housing Money
NextStates Can Balance Investments in Infrastructure and Other Priorities
Stay up to date
Receive the latest news and reports from the Center