SNAP Caseloads Down — as Expected

“Food Stamp Use Starting to Fall,” the Wall Street Journal points out, noting that SNAP (formerly food stamp) caseloads have fallen by 1.6 million people since their 2012 peak and that the Congressional Budget Office predicts SNAP spending will drop to its 1995 level as a share of the economy in five years. 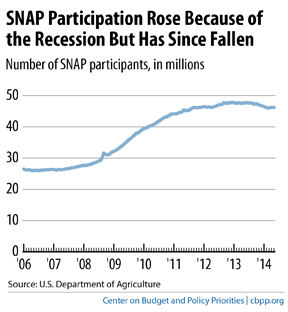 As we’ve explained, SNAP caseloads grew dramatically during the recession and stayed high due largely to a weak labor market.  As the economy began to recover, caseload growth began to flatten and then fall (see graph), a pattern consistent with past recessions.

Most states’ SNAP caseloads this May were below last May’s levels, the latest Agriculture Department data show (though caseloads were flat or somewhat higher in roughly a dozen states).

One beneficiary-turned-former-beneficiary is Louis Alexander.  Mr. Alexander turned to food stamps last year after losing his job as a maintenance man.  A year later, he is working again — as a truck driver for a company near his home in Louisville, Ky.

He credits food stamps for helping him eat and pay his other bills while job searching. . . .

For Jessica Singh, an unmarried mother who stopped using food stamps this spring, things are generally looking up.

After being dependent on SNAP for over two years, the 26-year-old in Fort Wayne, Ind., got a degree in human services, found internships and has landed two part-time jobs, including one at a domestic-violence shelter. Food stamps “definitely gave me a sense of stability,” she said.  “You know there is going to be food on the table.”

And yet it isn’t easy going without SNAP’s safety net.  If her 2-year-old gets sick and Ms. Singh can't work, her income takes a hit.  Last month, Ms. Singh visited a food pantry for the first time, picking up free boxes of pancake mix, cereal and Hamburger Helper, along with toilet paper.  She said she will go earlier next time; by the time she got there during her first trip, items like bananas and hamburger meat were gone.

For more on SNAP, including cost and caseload trends, who’s eligible, and its impact, see our chart book.

SNAP and the Fight Against Extreme Poverty

November 18, 2013
PreviousIn Case You Missed It...
NextNew “Food Insecurity” Figures Show Recovery Has Yet to Reach Many
Stay up to date
Receive the latest news and reports from the Center