SNAP and the Fight Against Extreme Poverty

“Food stamp recipients already took a cut in benefits this month, and they may face more [cuts]” as Congress considers slashing program funding, Nicholas Kristof’s latest New York Times column points out.  Kristof focuses on the potential impact on children, many of whom the program — now called SNAP — lifts out of extreme poverty, and his column is well worth a look. 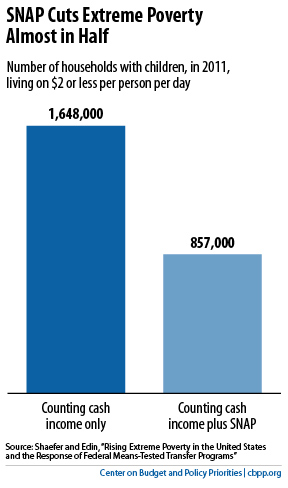 As I explained earlier this year, the number of households with children living on $2 or less per person per day — which is one definition of poverty the World Bank uses for developing nations — more than doubled between 1996 and 2011, to 1.6 million, according to research by the University of Michigan’s H. Luke Shaefer and Harvard University’s Kathryn Edin.

Counting SNAP benefits as income cuts the number of households with children in extreme poverty in 2011 by 48 percent, from 1.6 million to 857,000 (see graph).

SNAP also cut, by roughly half, the rise in extreme poverty among households with children between 1996 and 2011, the study found.

Policymakers considering more SNAP cuts should keep in mind that the program keeps more households with children out of extreme poverty than any other government program.

Whom and Where the November 1 SNAP Cuts Will Hit

October 29, 2013
PreviousIn Case You Missed It...
NextWhy the Obama Approach to Health Policy Cancellations Is Preferable
Stay up to date
Receive the latest news and reports from the Center