| By Phil Oliff
Our new survey finds that more than half of the states have cut K-12 education funding this year, as I explained earlier this week.  Ten states cut more than $100 per pupil for the 2012-2013 school year alone (see the first chart, below).
Image

Those cuts have largely been modest, but in many cases they come on top of severe cuts from past years.  The cumulative damage adds up.  Per-student funding is below pre-recession levels in 35 states, in inflation-adjusted dollars.  Fifteen states have cut more than $500 per student since 2008; Alabama, California, and Idaho have slashed more than $1,000 each (see second chart, below).
Image 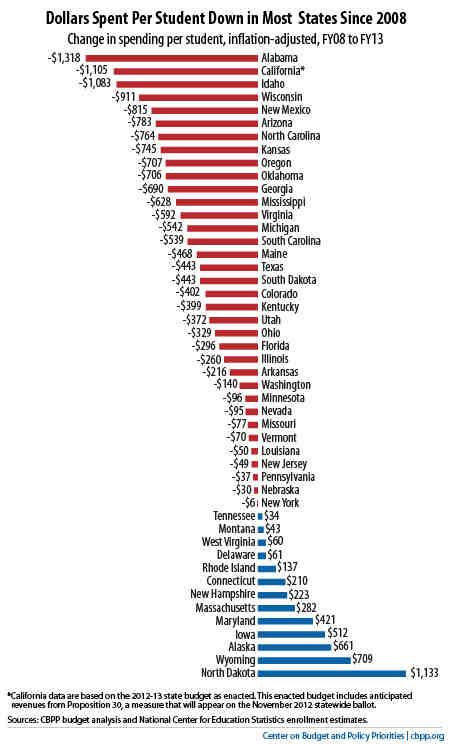 A number of states have started to restore education funding this year.  While this is good news, those returning dollars generally aren’t nearly enough to make up for the past few years of cuts.
Related Posts:
Topics:
State Budget and Tax

Share
Facebook Twitter Print Email
PreviousLooking Ahead to Next Week’s Poverty Figures
NextIn Case You Missed It...
Stay up to date
Receive the latest news and reports from the Center