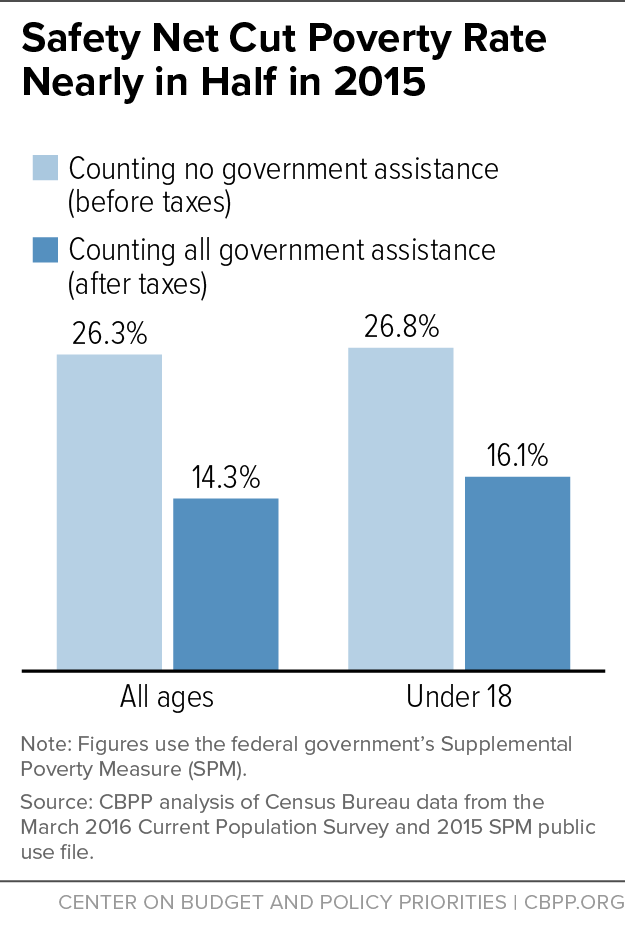 Figures may not add to totals due to rounding. Source:  CBPP analysis of Census Bureau data from the March 2016 Current Population Survey and 2015 SPM public use file

These figures understate the safety net’s effectiveness because they don’t correct for households’ underreporting of government benefits.  Household surveys depend on participants’ recollections over many months and typically fail to capture some income; the Census data are no exception.  In 2012, the most recent year for which we have data corrected for such underreporting, the safety net lowered the SPM poverty rate from 29.1 percent to 13.8 percent — a poverty rate 2.2 percentage points lower than in SPM data without these corrections.

Policymakers negotiating budget and tax priorities should keep in mind that the safety net keeps millions of children, adults, and seniors of all races and ethnicities from falling below the poverty line.  Deep cuts to these programs would make them much less effective at reducing poverty and would push the U.S. poverty rate substantially higher.

Greenstein: Health Coverage, Income, and Poverty All Move Decisively in Right Direction for First Time Since 1999

Commentary: Health Coverage, Income, and Poverty All Improved Decisively in 2015, With Historic Gains in Some Areas