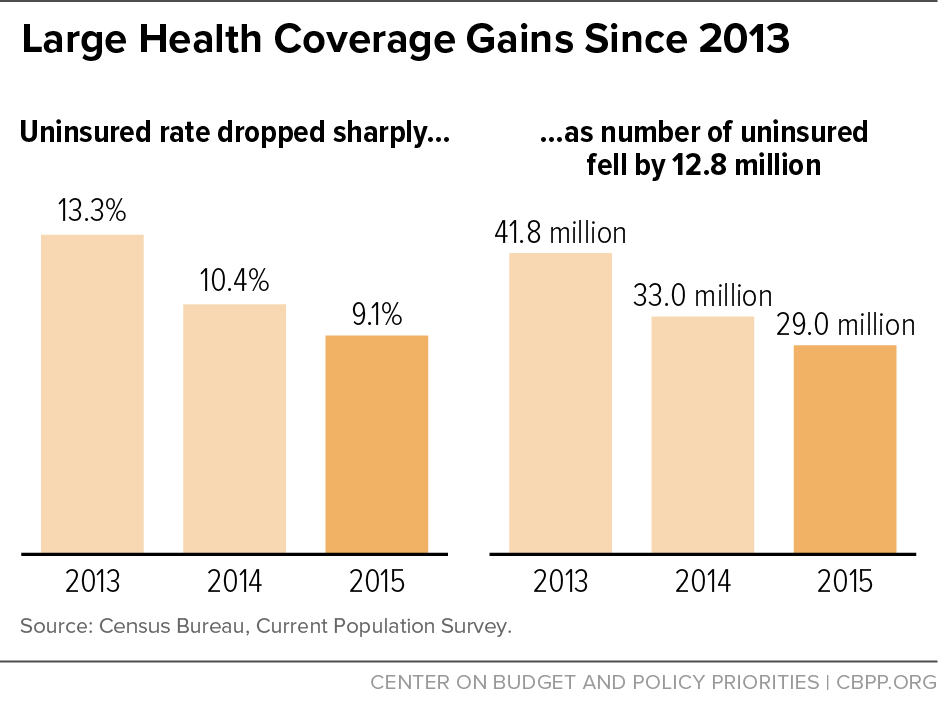 Four million fewer Americans were uninsured in 2015 than in 2014.  The share of Americans enrolled in public coverage rose from 36.5 percent in 2014 to 37.1 percent in 2015, while the share with private coverage rose from 66.0 percent to 67.2 percent.  The growth in private coverage occurred in direct-purchase coverage (employer-sponsored coverage remained flat), likely reflecting health reform’s subsidies to help people with modest incomes buy coverage through the health insurance marketplaces.

The uninsured rate in 2015 fell by at least 5 percent among every demographic category in the Census data, including gender, age, family income, working status, and race/ethnicity.  Certain groups had especially large gains:

While the Current Population Survey data released today are considered the gold standard for national-level health coverage estimates, they’re consistent with those from the Centers for Disease Control and Prevention’s National Health Interview Survey (NHIS), as well as a number of private surveys, which also show sizeable coverage gains in 2015 on top of the historic 2014 gains.

Similarly, the Commonwealth Fund finds that more than seven of ten adults with health reform’s marketplace coverage used it to visit a provider or fill a prescription — and 61 percent of them said they couldn’t have gotten this care without the marketplace coverage.

Greenstein: Health Coverage, Income, and Poverty All Move Decisively in Right Direction for First Time Since 1999