Congressional Republicans have announced they will not vote this week on the bill from Senators Bill Cassidy and Lindsey Graham to repeal the Affordable Care Act (ACA). The latest version of the bill would likely be at least as damaging — and in some ways, probably more so — than previous Republican repeal bills, as a number of new and updated Center analyses show:

Revised Version of Cassidy-Graham Proposal Is More of the Same
The revised version of the Cassidy-Graham ACA repeal bill makes some changes to funding formulas, but it retains the core structure — and harmful components — of the original bill, which would ultimately cause tens of millions of people to lose health coverage and weaken coverage for millions more.

Latest Version of Cassidy-Graham Still Has Damaging Cuts to Health Care Funding That Grow Dramatically in 2027
Like prior versions, the latest version of Cassidy-Graham would cut federal funding for health coverage for the large majority of states over the next decade. And the cuts would grow dramatically in 2027, when the bill would cut federal health care funding by $298 billion relative to current law, with the cuts affecting all states.

Cassidy-Graham Would Unravel Protections for People With Pre-Existing Conditions
The Cassidy-Graham proposal would allow insurers in the individual market to once again significantly scale back coverage and charge significantly higher premiums based on people’s health status and other characteristics. These changes would eliminate or unravel the ACA’s protections for people with pre-existing medical conditions, leaving them exposed to large gaps in benefits and unaffordable premium costs.

CBO: Cassidy-Graham Would Increase Uninsured by Millions, Cut Medicaid by $1 Trillion
A preliminary analysis from the Congressional Budget Office (CBO) found that Cassidy-Graham would result in millions more uninsured and would cut federal Medicaid spending by about $1 trillion over the next ten years.

Greenstein Statement on CBO Report on Cassidy-Graham Bill
The lack of sufficient time for the CBO to produce its normal comprehensive analysis of Cassidy-Graham underscores the dangerous and ill-advised process Senate Republican leaders were embarking on to advance the legislation, CBPP President Robert Greenstein notes, while also highlighting the CBO’s conclusions about the bill’s negative effects.

Like Other ACA Repeal Bills, Cassidy-Graham Would Cap and Deeply Cut Medicaid
Senators Bill Cassidy and Lindsey Graham’s revised bill to repeal the ACA would still deeply cut Medicaid by ending the ACA’s Medicaid expansion and converting the rest of Medicaid to a per capita cap. 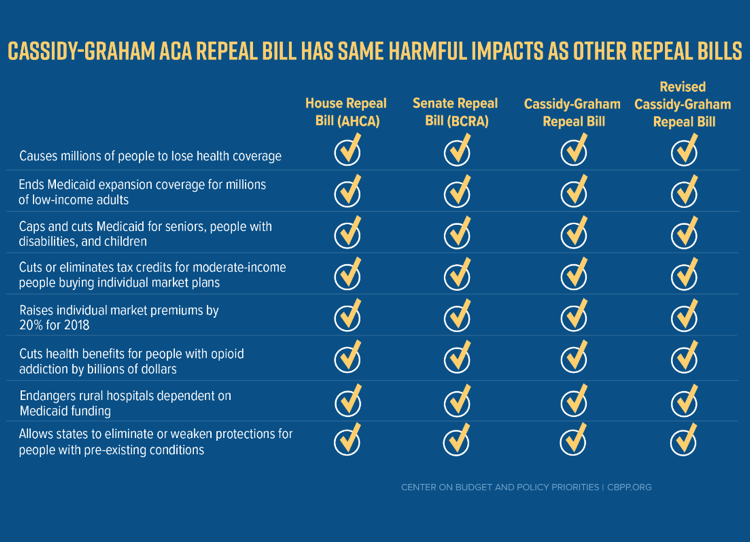 Commentary: Cassidy-Graham Would Create Huge Funding Inequities Across States
This commentary rebuts Senators Cassidy and Graham’s claim that the ACA treats states unfairly and that their plan would do better. In fact, Cassidy-Graham would create funding inequities, as it would raise funding for non-expansion states by imposing huge funding cuts — and thereby forcing coverage losses — on expansion states.

No State Wins Under Cassidy-Graham, Despite Its Funding Redistribution
States that made the most progress in boosting coverage under the ACA — especially due to the Medicaid expansion — would lose disproportionately under Cassidy-Graham. But even states that get a short-term funding boost would eventually see funding cuts, and all states would suffer due to other aspects of the bill, including its Medicaid per capita cap, its removal of protections for people with pre-existing conditions, and the insurance market uncertainty the bill would cause.

Medicaid Cuts in Cassidy-Graham Plan Would Reduce Access to Home- and Community-Based Services
Cuts due to the bill’s Medicaid per capita cap would make home- and community-based services — an increasingly popular alternative to institutional care — especially vulnerable to deep cuts because most of these services are optional for states.

Cassidy-Graham’s Dramatic Funding Cliff Not Required by Budget Rules and Would Have Lasting, Negative Impact
There are no procedural barriers to making the block grant in Cassidy-Graham permanent.