Presidential candidate Mitt Romney has endorsed a proposal to eliminate major federal assistance programs for low-income Americans and turn them over to the states, often with deep funding cuts.  But the rationale he offered for doing so in this past Sunday’s “Meet the Press” debate — that the federal bureaucracy eats up most of the money Congress provides for these programs, and little actually reaches people in need — is simply false, as our new paper explains.

At least nine-tenths of federal spending for each of these programs (and in most cases, a higher percentage) reaches low-income Americans (see graph). 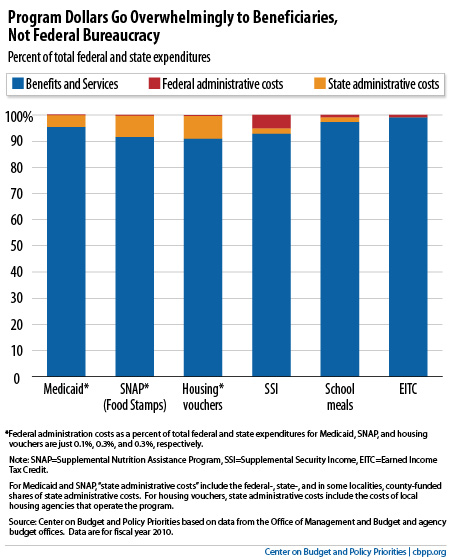 Romney said that “all these federal programs that are bundled to help people and make sure we have a safety net need to be brought together and sent back to the states,” and he specifically called for subjecting Medicaid, food stamps, and housing vouchers to this treatment.  He added:

What unfortunately happens is with all the multiplicity of federal programs, you have massive overhead, with government bureaucrats in Washington administering all these programs, very little of the money that’s actually needed by those that really need help, those that can’t care for themselves, actually reaches them.


This statement is far off-base.  Budget data for the major low-income assistance programs — Medicaid, food stamps (now known as the Supplemental Nutrition Assistance Program, or SNAP), the Supplemental Security Income program for the elderly and disabled poor, housing vouchers, the school lunch and breakfast programs, and the Earned Income Tax Credit — show that 91 to 99 percent of total federal spending on these programs reaches beneficiaries in the form of benefits or services, as does 90 to 99 percent of combined federal and state spending for these programs.  These figures are for fiscal year 2010, the latest year for which full data are available.

Here are the specifics: