The Urban-Brookings Tax Policy Center (TPC) has just released an analysis of Mitt Romney’s tax plan.  The chart below, using TPC figures, shows how the plan would affect people in different income groups compared to extending current policies such as President Bush’s tax cuts, which are scheduled to expire at the end of 2012. 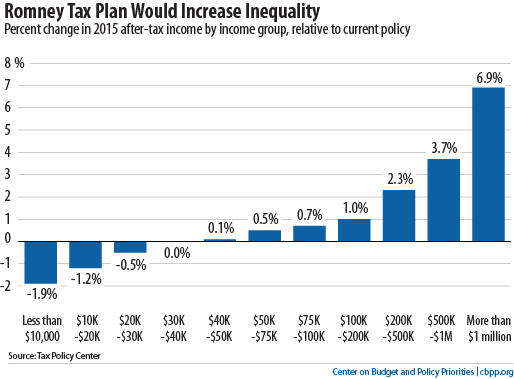 The Romney plan would provide massive tax cuts at the top of the income scale.  In fact, more than half of its total tax cuts would go to the top 1 percent of households (that is, people with incomes over $630,000), according to TPC.  The average millionaire would receive a tax cut of $146,000 in 2015, in addition to the $141,000 he or she would receive from an extension of the Bush tax cuts.

By contrast, the plan would hurt poor Americans by not extending some recently enacted tax policies aimed at low- and moderate-income families.  For example, it would eliminate recent marriage-penalty relief for working-poor families under the Earned Income Tax Credit and reduce a tax credit designed to make college more affordable for people with modest incomes.

The combination of large tax cuts at the top and tax increases at the bottom would further increase income inequality.

The Romney plan would also increase deficits by roughly $180 billion in 2015, TPC finds, which means that, over a decade, it would add roughly $2 trillion to deficits.

The Latest on Inequality

Confusion and Hypocrisy on the Debt

OECD: Tax and Spending Policy Can Push Against Rising Inequality

December 13, 2011
PreviousThe Latest on Inequality
NextStates Looking Ahead to 2013
Stay up to date
Receive the latest news and reports from the Center