Governor Mitt Romney’s proposals to cap total federal spending, boost defense spending, cut taxes, and balance the budget would require extraordinarily large cuts in other programs, according to an updated analysis that we released today. If policy­makers exempted Social Security from the cuts, as Governor Romney has suggested, and cut Medicare, Medicaid, and all other entitlement and discretionary programs by the same percentage, then nondefense programs other than Social Security would have to be cut 29 percent in 2016 and 59 percent in 2022.  Without the balanced budget requirement, the cuts would be smaller but still massive, reaching 40 percent in 2022.
Image 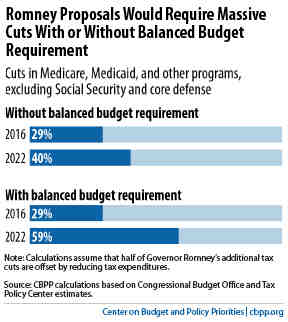 The cuts that would be required under the Romney budget proposals in programs such as veterans’ disability compensation, Supple­mental Security Income for poor elderly and disabled individuals, SNAP (formerly food stamps), and child nutrition programs would move millions of households below the poverty line or drive them deeper into poverty.  The cuts in Medicare and Medicaid would make health insurance unaffordable (or unavailable) to tens of millions of people.  The cuts in non­defense discretionary programs — which include a wide variety of public services such as elemen­tary and secondary education, law enforcement, veterans’ health care, environmen­tal protection, and biomedical research — would come on top of the deep cuts in this part of the budget that are already in law due to the discretionary funding caps established in last year’s Budget Control Act. Governor Romney’s cuts would be substantially deeper than those required under the austere House-passed budget plan authored by Budget Committee Chairman Paul Ryan (R-WI).  Over the 2014-2022 period, Romney would require $7 trillion to $10 trillion in cuts to programs other than Social Security and defense; the Ryan budget would make slightly more than $5 trillion in comparable cuts.    These updated estimates are based on new information and budget proposals from the governor, updated budget and economic projections from the Congressional Budget Office (CBO), modifications in the Center’s assumptions about “current policy” to match those that CBO and other budget analysts use, and other factors. Click here for the full report.