| By Will Fischer
Rental assistance programs kept millions of people above the poverty line in 2013, according to CBPP’s analysis of new Census data.  The findings highlight the central role that rental assistance plays in helping low-income Americans keep a roof over their heads. Our analysis using the Census Bureau’s Supplemental Poverty Measure (SPM), which accounts for non-cash benefits and taxes as well as cash income, shows that rental assistance kept 3.1 million people, including 1.0 million children, out of poverty last year (see chart).  (The SPM methodology understates the value of some types of rental subsidies, so the actual impact on poverty likely is somewhat higher than these estimates indicate.)
Image 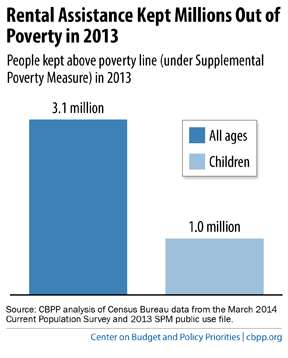 The SPM data don’t break down what type of rental assistance kept these people out of poverty, but for most, it likely was one of the three primary federal rental assistance programs: Housing Choice Vouchers, Public Housing, and Section 8 Project-Based Rental Assistance. Rental assistance could lift many more people out poverty, but due to funding constraints only one in four families eligible for assistance receives it.  Families without rental assistance are far more likely to experience homelessness and housing instability, which have been linked to negative health, education, and developmental outcomes over the long run. Sequestration cuts to Housing Choice Vouchers in 2013 caused tens of thousands more families to be left without the assistance they need to afford stable homes.  Those cuts were only partly restored in 2014.  When it returns in November, Congress will consider legislation setting 2015 funding levels for many federal programs.  As they weigh their options, policymakers should place a high priority on protecting funding for rental assistance to avoid exposing more of the nation’s most vulnerable people to poverty, homelessness, and hardship.