The highway bill before the Senate would require the IRS to outsource part of its tax enforcement to private debt collectors.  This policy has failed before — when it actually lost money for the government, according to the IRS — and remains misguided.  Lawmakers should delete this provision from the highway bill as it advances through Congress. 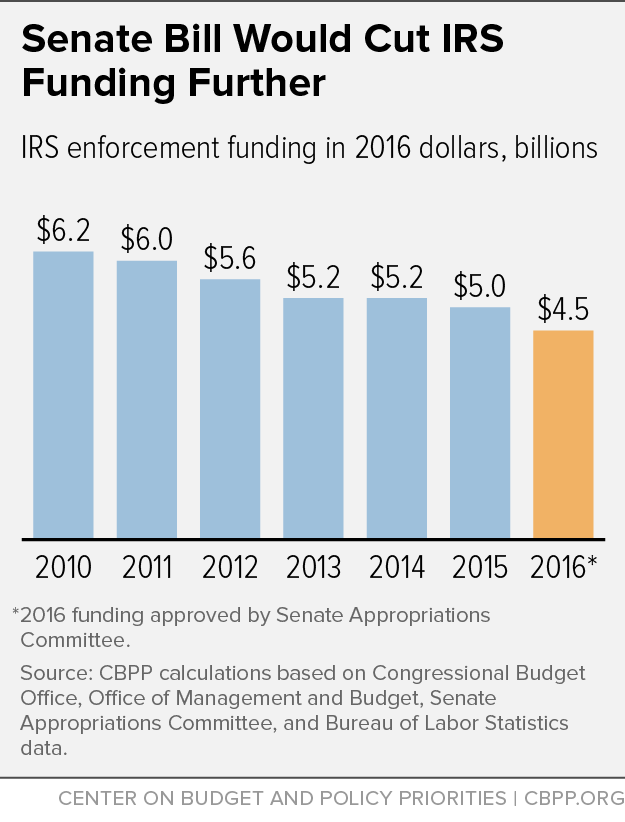 Tax collection is a core government function.  Since 2010, however, Congress has compromised the IRS’s ability to provide taxpayer services and collect the taxes that are owed.  Lawmakers have slashed the IRS enforcement — i.e. tax collection — budget by one-fifth since 2010, adjusted for inflation.  The cuts have badly damaged enforcement efforts, with a 20 percent decline in the number of IRS enforcement staff and audit rates for individuals and businesses reaching their lowest levels in nearly a decade last year.  And the Senate Appropriations Committee approved a bill that would cut IRS enforcement funding significantly further (see chart).

Some senators point to IRS collection difficulties to justify this misguided privatization proposal — even though Congress itself has undercut the IRS’s ability to collect taxes.  And by requiring the IRS to give private collectors the cases it lacks the resources to pursue, the provision only encourages congressional critics of the IRS — and the private debt collection industry — to push for more cuts to tax enforcement.  More IRS enforcement cuts will mean more privatization efforts.

This is particularly troubling given the failures of a past IRS privatization effort.  IRS National Taxpayer Advocate Nina Olson, who helped develop the previous private debt collection program of 2006-09, told Congress last year:

Based on what I saw, I concluded the program undermined effective tax administration, jeopardized taxpayer rights protections, and did not accomplish its intended objective of raising revenue.  Indeed, despite projections by the Treasury Department and the Joint Committee on Taxation that the program would raise more than $1 billion in revenue, the program ended up losing money.  We have no reason to believe the result would be any different this time.

The IRS ended that program after finding it lost money.  When Congress was considering legislation last year to again privatize IRS debt collection, consumer and civil rights groups sent a letter in strong opposition, stating: “year after year, the Federal Trade Commission receives more complaints about debt collectors than any other specific industry, over 200,000 complaints filed just in 2013.”

Reinstituting private debt collection would be misguided for another reason: IRS impersonation scams, in which criminals call taxpayers saying they represent the IRS and demand payment and personal details, have grown in recent years — this year they were #1 on the IRS list of “Dirty Dozen” tax scams.  Thus, introducing private debt collectors into the mix could confuse taxpayers and risk increasing an already significant scam problem.

Lawmakers should delete this harmful provision from the Senate highway bill and let it rest for the future.  If Congress truly wants to improve tax collection and reduce deficits, it should reverse its five-year attack on the IRS budget so that the agency can perform this core function and provide taxpayers the fair treatment they deserve.

June 1, 2015
PreviousTwo Ways States Can Boost Working Families’ Income
NextIn Case You Missed It...
Stay up to date
Receive the latest news and reports from the Center