President Trump promised to replace the Affordable Care Act (ACA) with, as he said a few weeks ago, “a very competitive plan” under which “costs will come down [and] health care will go up very substantially. People will like it a lot.” But such promises don’t match the facts. Here’s how they stack up against the Congressional Budget Office (CBO) analysis of the House Republican ACA repeal legislation.

Trump promised: “We’re going to have insurance for everybody… There was a philosophy in some circles that if you can’t pay for it, you don’t get it. That’s not going to happen with us.”

CBO found: The House plan would mean that 14 million people would lose coverage by next year — and 24 million by the end of the decade. The share of non-elderly Americans without health insurance would nearly double, from about 10 percent today to about 19 percent by 2026 — at or above the pre-ACA uninsured rate (see first chart). 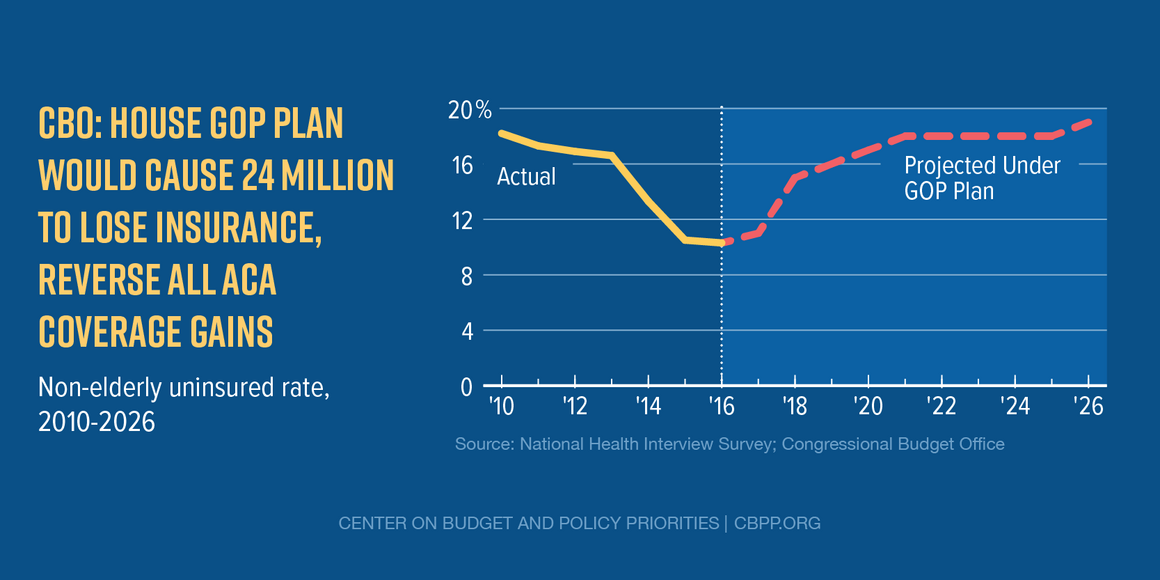 Trump promised: “I was the first & only potential GOP candidate to state there will be no cuts to Social Security, Medicare & Medicaid,” and "[W]e should give our great state governors the resources and flexibility they need with Medicaid to make sure no one is left out.”

CBO found: The House plan would cut Medicaid by $880 billion over ten years (see second chart), cutting federal funding for it by 25 percent in 2026. The result would be deep coverage losses, with 14 million fewer Medicaid enrollees by 2026. 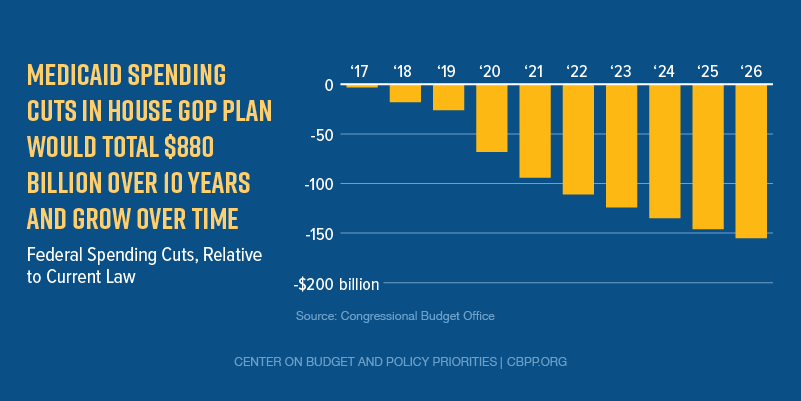 Trump promised: Trump said there would be “lower numbers, much lower deductibles” in a repeal plan.

CBO found: Under the House bill, deductibles would be higher. CBO and the Joint Committee on Taxation “expect that individuals’ cost-sharing payments, including deductibles, in the nongroup market would tend to be higher than those anticipated under current law.” For example, the House plan eliminates help with deductibles and co-payments for low-income people. Moreover, many people would be unable to purchase lower deductible plans even if they were willing to pay a higher premium. Under the House plan, as CBO explains, “an insurer could choose to sell only plans with lower actuarial values” – i.e., covering a lower share of total medical costs and as a result having higher deductibles – and notes that “[m]any insurers would find that option attractive.”

Trump promised: I am also calling on this Congress to repeal and replace Obamacare with reforms that expand choice, increase access, lower costs, and, at the same time, provide better healthcare.”

CBO found: The House plan would make insurance less accessible and affordable for virtually all age and income groups, causing uninsured rates to rise for young, middle-aged, and older Americans with incomes both below and above 200 percent of the federal poverty line. And, as we’ve explained, most low- and moderate-income people who keep their insurance would pay more in premiums for skimpier plans. While the sticker price for premiums would fall slightly, on average, savings would be more than offset for millions of people because the House plan would provide lower tax credits to help them pay their premiums. And premiums for older Americans would rise sharply. Indeed, in one example in its report, CBO found that a 64-year-old making $26,500 a year would see their net premium – how much they pay after taking into account the tax credit – rise by $12,900.