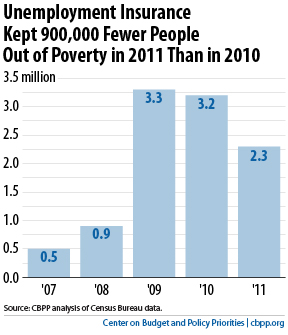 UI benefits kept 900,000 fewer people out of poverty in 2011 than in 2010, the Census figures show (see graph).  Total UI benefits fell by roughly one-quarter as the 2009 Recovery Act’s temporary benefit increase expired, many jobless Americans exhausted their benefits before they found jobs, and (on a positive note) the unemployment rate edged down.

The economy showed modest improvement in 2011, as the number of private-sector jobs rose by 1.9 million.  But the UI decline — plus the loss of 386,000 public-sector jobs, mostly in state and local government — pushed poverty in the other direction.

Falling UI payments could slow the recovery’s progress against poverty again in 2012 — and especially in 2013, depending on what policymakers do in coming months.  Federal UI benefits will end entirely on December 31 if they don’t act.

Click here for our full statement about the new Census figures.

A Timely Reminder: Improvements in the Safety Net Have Dampened the Rise in Poverty

Poverty Rate Would Nearly Double Without the Safety Net