A Timely Reminder: Improvements in the Safety Net Have Dampened the Rise in Poverty

When the Census Bureau releases its poverty figures for 2011 tomorrow, the official poverty rate could reach its highest point since 1965, as I discussed earlier this year.  Although private-sector employment improved in 2011, other factors that affect the poverty rate (such as the amount of unemployment assistance provided to jobless families, government employment, and real average weekly wages) fell.

But even if the comparison to 1965 proves technically true, it will be misleading.  That’s because the official poverty rate is based on families’ pre-tax, cash income.  It ignores all non-cash benefits (such as SNAP, formerly called food stamps) and working-family tax credits such as the Earned Income Tax Credit (EITC) and Child Tax Credit — the very parts of the safety net that have expanded substantially over the past half century and that have reduced the reality of poverty, even if the improvement doesn’t show up in the official poverty figures.

In 1965, cash programs that are included in the official poverty measure — Unemployment Insurance, Aid to Families with Dependent Children (since converted into Temporary Assistance for Needy Families), Supplemental Security Income for the low-income elderly and people with disabilities, and state and local general assistance programs — comprised more than 90 percent of the benefits provided by major federal income-support programs for low-income and jobless Americans.  By 2010, they accounted for only a little more than half of the benefits.

In other words, the official measure of poverty counts various means-tested cash assistance programs that have shrunk markedly, while ignoring key forms of “non-cash” assistance that have expanded substantially.  The result is that using the official poverty measure to compare today’s poverty rate to that of decades ago yields a distorted picture that obscures more than it illuminates.

The Census Bureau is developing alternative poverty measures that count the full safety net’s effect.  Its most complete and analytically sound measures — those that follow the poverty-measurement recommendations of the National Academy of Sciences (NAS) — go even further, also accounting for rising work expenses and out-of-pocket medical expenses, for example, and modestly updating the poverty line itself.

Under these measures, poverty rose slightly over the last decade, including during the recent downturn, but has been flatter than the official rate since 2000.  Census will release NAS-based poverty data for 2011 later this year.

Unfortunately, the NAS measures don’t stretch back to the 1960s or 1970s to allow a full comparison with the official poverty data.  But a cruder measure that I calculated myself — unlike the NAS measures, it’s not a complete and balanced measure of poverty — shows the growing importance of non-cash benefits in raising people out of poverty back to 1979 (see chart).

Under this measure, which counts taxes, the estimated value of food stamps, and housing assistance, poverty rose much more slowly in recent years than the official poverty rate.  It shows that in 2010, such “non-cash” assistance cut the number of people in poverty by more than 10 million, or 3 percent of the population. 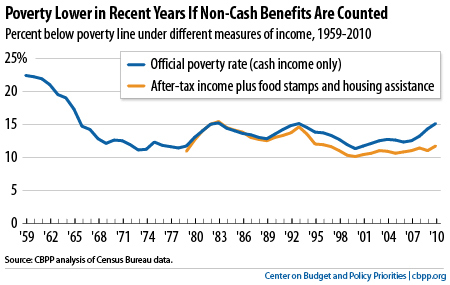 Tomorrow’s Census data will likely underscore the very serious state of poverty in America.  But as we consider how to reduce the number of poor families, we shouldn’t get distracted by comparisons that fail to account for how effectively major parts of the safety net have fought poverty.