Pell Grant Funding Should Be Part of Final Debt-Limit Deal

One element that the debt-limit plans from House Speaker John Boehner and Senate Majority Leader Harry Reid have in common — and that should be part of any final agreement — is increased funding for Pell Grants, which help nearly 10 million students from low- and moderate-income families pay for college.
Image 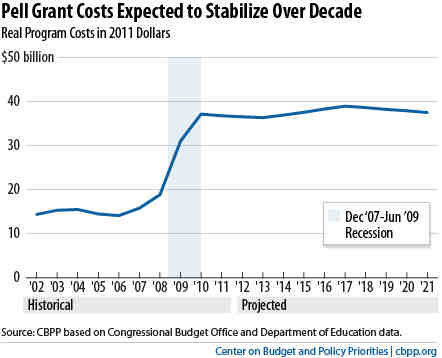 To be sure, the Boehner plan as a whole could lead to greater increases in poverty than any other law in modern U.S. history, as we have explained.  But, like the Reid proposal, the Boehner proposal would help address a funding gap in the Pell Grant program.  With recent economic data suggesting that the economy is simply not growing fast enough to significantly reduce the need for Pell Grants, the Reid and Boehner proposals would help fully fund the program for the next two years. Pell Grant costs have jumped recently, partly in response to sensible policy expansions such as an increase in the maximum grant, which has failed to keep pace with college costs.  The recession has raised program costs as well, as students have greater financial need and many laid-off workers have sought to improve their education and skills through college.  But Pell spending is not expected to grow further in inflation-adjusted terms (see graph). Because of Pell’s complicated funding structure, the program needs additional funding over the next two years to avoid drastic cuts in the number of students it can help, each student’s award level, or both.  The Boehner and Reid debt limit proposals, acknowledging Pell’s role in providing access to opportunity for lower-income students, provide most of that additional funding.  And both plans fully offset the additional Pell funds with reductions in other higher education spending.  Unfortunately, some House Republicans are objecting to the Pell funding. The Pell Grant provisions are one area in the debt-limit fight where both parties are right.  These funds should be part of the final agreement.
Topics:
Federal Budget, Budget Outlook, Budget Process
PreviousIt’s Raining, So States Should Use Their Rainy Day Funds
NextIn Case You Missed It...