It’s Raining, So States Should Use Their Rainy Day Funds 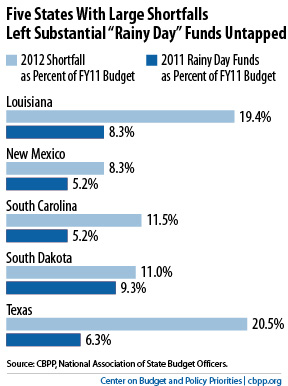 Take Texas, whose governor and lawmakers declined to draw on the state’s $6 billion in reserves to help offset its $18 billion shortfall for the coming two-year budget period.  Instead, they imposed draconian funding cuts on preschool and K-12 education, universities, health care, and other services.  They also deliberately provided less Medicaid funding than the program expects to need over the next two years, a gimmick that helped them “balance” the budget on paper but will force them to find new revenues or impose additional cuts later in the biennium.

Or take Louisiana, which opted not to use its hefty reserve fund — 8.3 percent of last year’s spending — to help close a budget shortfall that was nearly 20 percent of last year’s spending.  At the same time, for the third year in a row, Louisiana will fail to fund K-12 education at the minimum amount required to ensure adequate funding for at-risk and special needs students.  The state also is cutting support for child and family services by more than 30 percent, including services for neglected and abused children and victims of domestic violence.

Similarly, New Mexico, South Carolina, and South Dakota have significant reserves but didn’t use any of them to help balance their budgets.  Instead, they opted to rely on steep budget cuts in services that hurt the states’ neediest citizens.

Two other states — Iowa and Nebraska — also have reserves totaling at least 5 percent of last year’s spending.  Unlike the five states above, Iowa and Nebraska used some of their reserves to alleviate spending cuts, though even these two states left substantial rainy day funds on the table.

The dramatic drop in revenues stemming from the recession is just the sort of situation for which rainy day funds are intended.  States should make full use of them.