The United States has made historic progress in expanding health coverage since President Obama signed the Affordable Care Act (ACA) into law on March 23, 2010, as highlighted by the charts below (based on the latest available data). Uninsured rates have fallen dramatically across demographic groups; people receiving coverage through the ACA’s Medicaid expansion have better access to health care, financial security, and health; and a large majority of enrollees in the ACA marketplaces say they’re satisfied with their coverage. These facts are worth keeping in mind amidst ongoing efforts to sabotage the ACA.

The uninsured rate stood at a record low of 8.8 percent in 2016, the third full year in which the ACA’s major coverage provisions were in effect. The number of uninsured fell by 13.7 million between 2013 and 2016 and by millions more from 2010 to 2013, as other provisions of the ACA, such as the option for young adults to remain enrolled in their parents’ health plans, took effect.

The latest Census data also underscore the importance of state participation in the ACA’s Medicaid expansion. As a group, the 32 states (including the District of Columbia) that expanded Medicaid have experienced much bigger declines in their uninsured rates than non-expansion states. 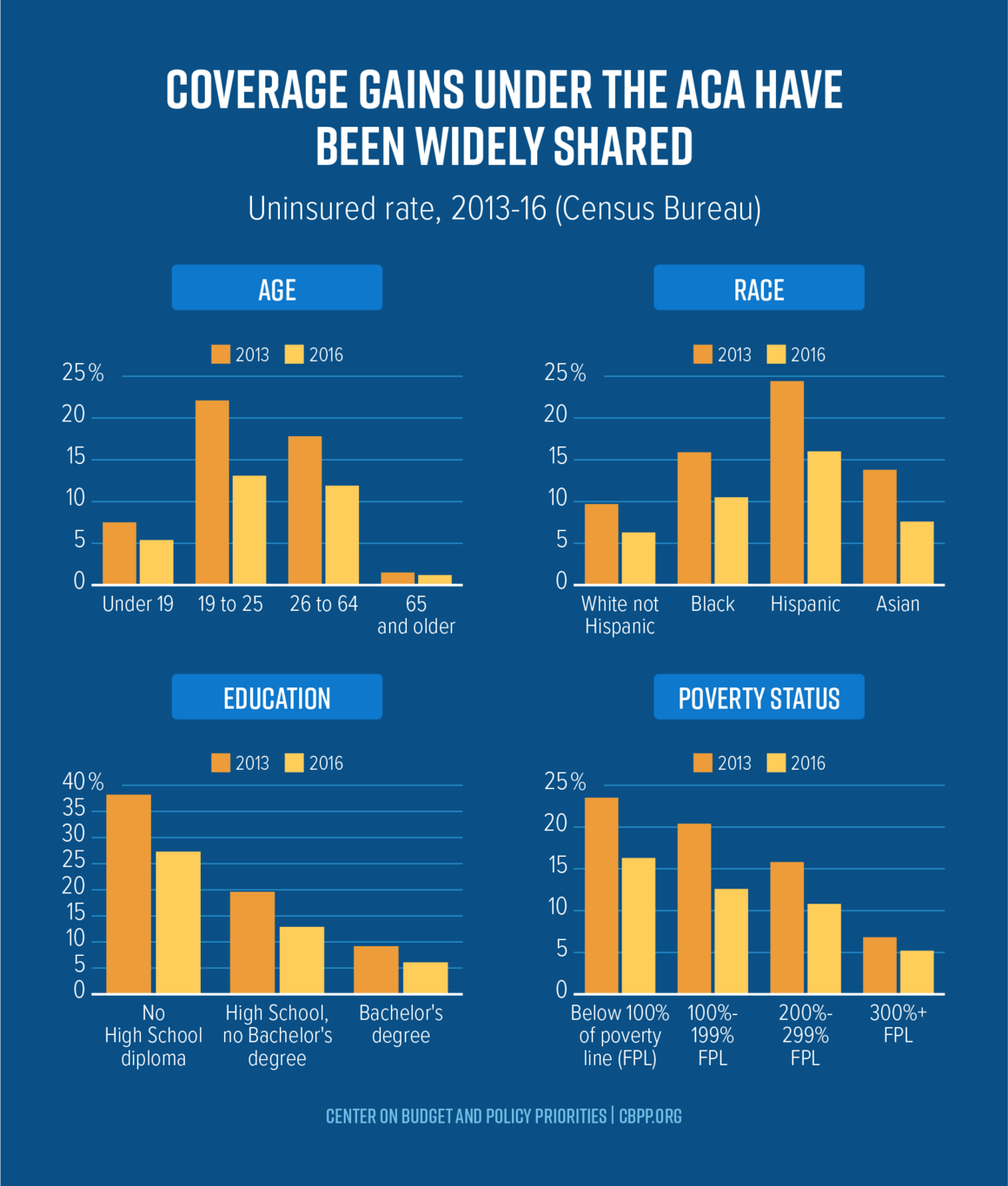 The dramatic coverage gains under the ACA have been broadly shared across non-elderly Americans. (Seniors already had near-universal coverage through Medicare.) Between 2013 and 2016, uninsured rates fell by 20 percent or more for low-, moderate-, and middle-income Americans; for all age groups and racial and ethnic groups; and for people at all education levels.

These gains reflect the combined effects of the ACA’s coverage provisions, including expanding Medicaid to low-income adults, creating the health insurance marketplaces and subsidies to help low- and moderate-income people afford coverage through the individual market, allowing young adults to remain on their parents’ plans until age 26, and reforming the individual market (for example, by prohibiting insurers from denying coverage or charging higher premiums based on health status).

The ACA’s coverage provisions are translating into improved access to care and greater financial security. Some of the most in-depth research has focused on the ACA’s Medicaid expansion. For example, a study comparing low-income adults in Kentucky and Arkansas (which expanded Medicaid) to those in Texas (which did not) found sizable improvements in the expansion states compared to the non-expansion state.

In addition, surveys of Medicaid expansion beneficiaries in Ohio and Michigan found that Medicaid coverage made it easier for them to look for work and stay working.

4: Better Coverage and Access to Treatment for People with Opioid-Use Disorders

Many uninsured people coping with opioid-use disorders have gained coverage through the ACA’s Medicaid expansion. The share of opioid-related hospitalizations in which the patient was uninsured fell dramatically in states that expanded Medicaid: from 13.4 percent in 2013 (the year before the expansion took effect) to just 2.9 percent two years later.

Moreover, substance use disorders usually don’t occur in isolation; people with these disorders also need access to physical and mental health services. Medicaid expansion helps people get these services, too. 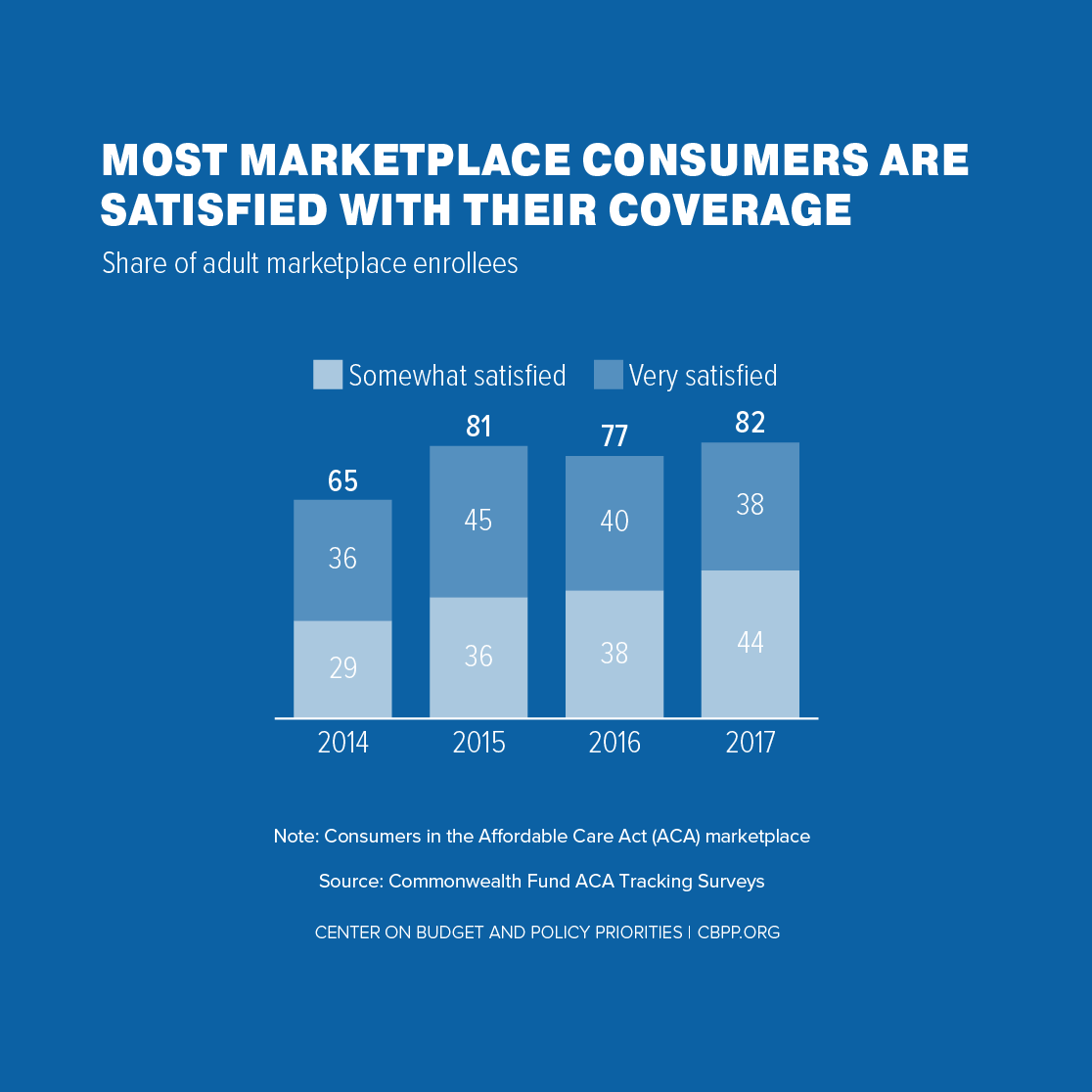 More than 80 percent of consumers who bought private coverage for 2017 through the ACA marketplaces are satisfied with their coverage, similar to previous years, surveys show. That helps explain why sign-ups remained strong this year, with 11.8 million marketplace plan selections for 2018 (only about 4 percent below 2017) despite the Trump Administration’s cuts to outreach and enrollment assistance and the confusion created by Republicans’ year-long effort to repeal the ACA.

July 27, 2016
PreviousHidden New Tax Breaks for Wealthy Households, Corporations Risk State Revenues
Next2018 Funding Bill Falls Short for the IRS
Stay up to date
Receive the latest news and reports from the Center