Update, February 2, 2015: We’ve updated this post to reflect the President’s sequestration replacement proposal that the Administration made public today with the release of his fiscal year 2016 budget. The President’s proposal, in his upcoming fiscal year 2016 budget, to provide partial relief from the Budget Control Act’s (BCA) “sequestration” cuts for 2016 and fully offset it with alternate deficit reduction is consistent with both the BCA and long-term fiscal responsibility. The proposal, which would still leave non-defense appropriations 11 percent below their 2010 level adjusted for inflation (see graph), would allow modest near-term funding improvements in areas such as science, education, and infrastructure. And its offsetting deficit-reduction measures would likely improve the longer-term budget outlook. 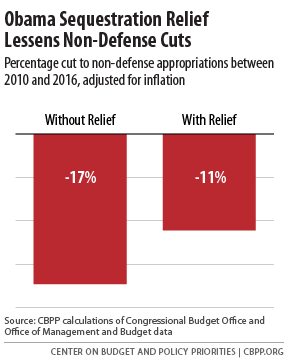 Far from violating the BCA as some have charged, the Obama proposal would do what the BCA originally intended: achieve long-term deficit reduction through savings in mandatory programs and revenues rather than deeper cuts in discretionary programs. Policymakers never intended for sequestration to happen; they only included it in the BCA as a fallback in case the congressional “supercommittee” failed to recommend additional deficit reduction beyond the BCA caps in 2011. Sequestration was supposed to spur the supercommittee to compromise; it was not supposed to occur. The Obama proposal is also consistent with 2013’s bipartisan Murray-Ryan deal, which provided sequestration relief in 2014 and 2015, using changes to mandatory programs and receipts to offset the cost. It is also consistent with the Murray-Ryan deal in providing partial, not full, relief. The proposal would pay for near-term sequestration relief with changes in mandatory spending and revenues. While we won’t know the details of those proposed changes until the budget is released, we expect them to be permanent changes in mandatory programs and revenues that generate savings not just over ten years but in subsequent decades as well. As a result, they likely would help reduce long-term deficits in a way that the sequestration cuts don’t, because sequestration ends after 2021. The Obama proposal also makes sense on policy grounds, replacing sequestration cuts that no one thinks are the best way to reduce deficits. Sequestration puts too much of the burden of deficit reduction on discretionary programs. The proposal would shrink the sequestration cuts for both defense and non-defense programs by roughly equal amounts — $38 billion in defense and $37 billion in non-defense.  On the non-defense side, this would eliminate the sequestration reduction in appropriated programs. As noted, for 2016 the non-defense appropriations under the proposal would still remain 11 percent below their level of six years ago, after adjusting for inflation — compared to a 17 percent cut without the proposed relief. If one adjusts for population growth as well as inflation, the cut since 2010 would be 15 percent under the Obama proposal and 21 percent without relief. Related Posts:
Topics:
Federal Budget
PreviousThe Unconvincing Claim That Unemployment Benefits Hurt Jobs
NextHelping Eligible Workers Claim the EITC
Stay up to date
Receive the latest news and reports from the Center