No Bonuses for You, House Committee Tells States That Improve Children’s Health Coverage

The House Energy and Commerce Committee voted last week to eliminate performance bonuses for states that streamline their Medicaid and CHIP (Children’s Health Insurance Program) procedures and reduce red tape so that more eligible low-income children can get and keep health coverage.

Like several other steps the committee took to produce the savings required by the House-passed budget, such as defunding state health insurance exchanges and letting states drop people from Medicaid and CHIP, eliminating the bonuses would mean more Americans — in this case, low-income children — would go without health insurance.

Congress created the bonuses in 2009 when it renewed CHIP, a program that, along with Medicaid, has helped substantially expand health coverage among children over the last decade, even as coverage among adults has steadily eroded.  The federal government has awarded 23 states over $500 million in bonuses (see map). 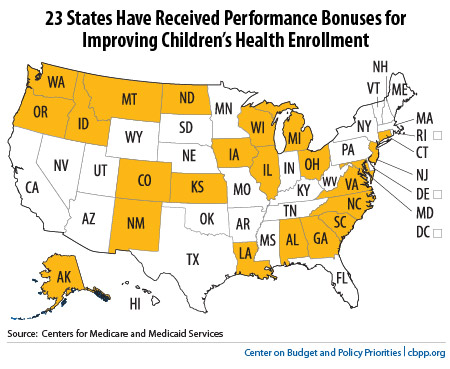 To qualify, a state must adopt certain measures that simplify the application and renewal process for eligible children and must meet a target for enrolling more eligible children.  South Carolina, for example, last year started using family information that it had already obtained and verified as accurate for SNAP (formerly food stamps) to renew children’s eligibility for Medicaid, rather than require families to resubmit that information.

In the first eight months of using this new procedure, known as Express Lane Eligibility, South Carolina eliminated extra paperwork for the families of over 84,000 children.

Reforms like these also can lower state administrative costs.  South Carolina estimates that Express Lane Eligibility will save about 50,000 hours of worker time and $1 million per year.

Without the incentive of these performance bonuses, some of the 23 states that have received bonuses probably would not have simplified their programs and increased Medicaid and CHIP participation among eligible children.

Eliminating the bonuses would save only about $400 million, the Congressional Budget Office says — just a tiny fraction of the Energy and Commerce Committee’s required $97 billion in savings and unnecessary in any event, since the committee’s total savings package well exceeds $97 billion even without the bonus provision.  Moreover, removing an incentive for states to help more eligible children get coverage could have a large and harmful impact on many children’s lives.

September 20, 2011
PreviousDon’t Forget Demographics’ Role in Rising Disability Costs
NextHealth Insurance Exchanges Will Be Net Plus for States
Stay up to date
Receive the latest news and reports from the Center