Since the start of the Affordable Care Act’s (ACA) Medicaid expansion to low-income adults, evidence has poured in that the expansion is helping enrollees access and afford care. But as more time passes, researchers can also examine how expansion is affecting other health and financial outcomes. New research finds the policy is delivering on its promise to improve both financial security and health – including by saving lives.

Medicaid expansion saved the lives of at least 19,200 older low-income adults from 2014 to 2017 in states that adopted it, while state decisions not to expand cost the lives of 15,600. (Hover on the map below for state-by-state estimates.) Expansion was most consequential in preventing premature deaths from causes such as cardiovascular disease and diabetes, which are conditions responsive to medical care.

Figures colored orange represent lives lost in states that have not adopted Medicaid expansion for low-income adults under the Affordable Care Act. Blue represents lives saved in expansion states. Table omits the District of Columbia, Massachusetts, New York, and Vermont, because they expanded Medicaid prior to 2014 and are therefore excluded from the analysis.

** Estimates for Idaho, Nebraska, and Utah are lives lost from 2014 to 2017. These states have adopted Medicaid expansion but have yet to implement it.

As our new paper explains, the study likely underestimates the lives saved by expansion because it doesn’t capture the policy’s long-term benefits or include certain expansion states. Nonetheless, expansion’s lifesaving potential ranks with other major public health interventions: if all states had expanded Medicaid, the lives saved just among older adults in 2017 would roughly equal the lives saved by seatbelts among the full population. (See figure below.) 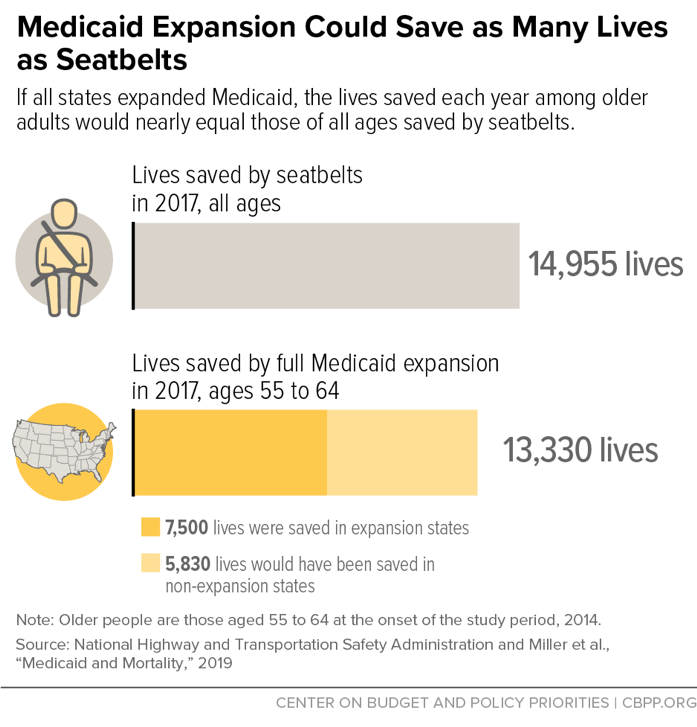 This research is only one of many recent studies that show how Medicaid expansion is improving health and well-being. For example: 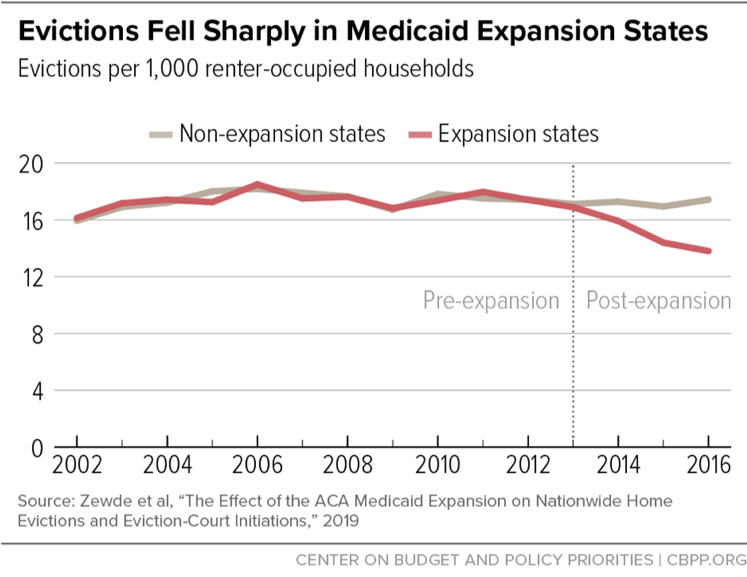 Our Medicaid expansion chartbook summarizes this and other research.

These findings should give the 14 states that haven’t yet decided to expand Medicaid more reason to do so. They should also finally put to rest claims that Medicaid doesn’t provide quality coverage, such as Centers for Medicare & Medicaid Services Administrator Seema Verma’s suggestion that Medicaid gives low-income adults “a[n] insurance card without care.” Instead, the evidence shows, Medicaid expansion lets low-income adults get preventive services, medications, and other care they couldn’t otherwise, and lets them get the care they need without incurring burdensome medical debt. And we now know that it’s sometimes literally a matter of life and death, particularly for people with serious but treatable health needs.

October 21, 2020
PreviousIn Case You Missed It...
NextRental Assistance Shortage Leaves 700,000 Veterans Homeless or Struggling to Afford Housing
Stay up to date
Receive the latest news and reports from the Center