New “Food Insecurity” Figures Show Recovery Has Yet to Reach Many

Some 14.3 percent of the nation’s households were “food insecure” in 2013, meaning they had difficulty affording adequate food at some point during the year, today’s Agriculture Department (USDA) report shows — a figure not statistically different from 2012’s 14.5 percent and well above pre-recession levels (see graph).   The persistence of high food insecurity in the aftermath of the recession shows that the economic recovery has failed to reach many low-income families.  It also highlights the importance of SNAP (formerly food stamps) in helping families obtain an adequate diet.
Image 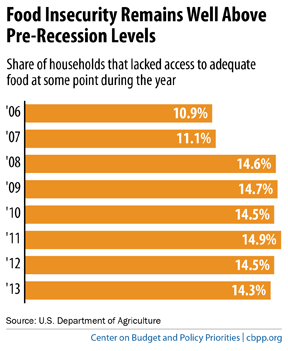 The roughly 49 million people in food-insecure households include 15.8 million children, according to the report. Households with children face especially high rates of food insecurity:  about 19.5 percent among households with children overall and 20.9 percent among households with children under age 6.  Research shows that household food insecurity is linked to negative health and developmental outcomes for children, including poorer physical health and psychosocial development, iron deficiency anemia, and higher rates of hospitalization and chronic health conditions. Food insecurity also varies significantly by state.  The highest rates in 2011-2013 were in Arkansas (21.2 percent), Mississippi (21.1 percent), and Texas (18 percent).  (USDA uses a three-year average for individual states due to small sample sizes.)  The lowest rates were in North Dakota (8.7 percent), Virginia (9.5 percent), and New Hampshire (10.2 percent).  Most states saw no statistically significant change in 2011-2013 from 2008-2010, but five of the six states that did experience a change saw an increase. USDA’s annual survey also found that 5.6 percent of households had “very low food security” in 2013, meaning that household members had to take steps such as skipping meals at some point during the year due to lack of resources.  The share of households with very low food security has remained statistically unchanged since 2011 and well above pre-recession levels.

Topics:
Food Assistance
PreviousSNAP Caseloads Down — as Expected
NextTwo Policy Tools States Can Use to Build a Broader Recovery
Stay up to date
Receive the latest news and reports from the Center