The Census Bureau released its annual American Community Survey (ACS) this week, confirming that more young adults were insured in 2012.  (Earlier in the week, Census released its more well-known Current Population Survey (CPS), which found that the uninsured rate among young adults fell again in 2012, but not on a statistically significant basis.  The ACS’ larger sample size makes its health insurance data more robust than what’s reported through the CPS.) The share of 18- to 24-year-olds without health insurance coverage declined from 25.8 percent in 2011 to 24.3 percent in 2012, according to the ACS data.  This marked the second consecutive year that the uninsured rate for this group has fallen, now down 5.2 percentage points since 2010 (see chart).
Image 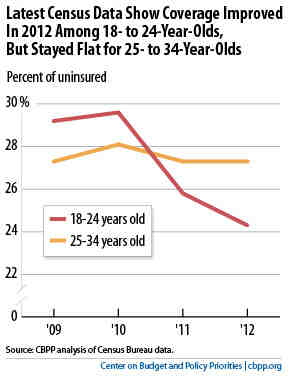 These coverage gains are due to growth in private coverage among young adults primarily resulting from a provision of health reform (the Affordable Care Act, or ACA) that allows adult children to stay on their parents’ private insurance plans until they turn 26.  The share of 18- to 24-year-olds with private coverage increased to 63.2 percent in 2012, up from 61.6 percent in 2011 and 58 percent in 2010. These findings amplify a growing body of research on the positive coverage effects of the young-adult provision.  A Commonwealth Fund survey found that 6.6 million adults aged 19 through 25 who either joined or stayed on their parents’ insurance plans between November 2010 and November 2011 could not have done so without the health reform provision.  Similarly, analyses by the Centers for Disease Control and Prevention, the National Bureau of Economic Research, and the Kaiser Family Foundation show significant coverage gains among young adults since 2010.  Other studies from the Commonwealth Fund and the RAND Corporation have found that health insurance coverage protects young adults with health concerns against financial hardship. The increase in coverage among 18- to-24-year-olds means that they’re no longer the age group most likely to be uninsured.  That dubious distinction now belongs to 25- to 34-year olds, 27.3 percent of whom were uninsured in 2012.  However, the uninsured rate for this group — as well as other non-elderly adults — should fall considerably in 2014, when health reform’s major coverage expansions take effect.
Related Posts:
Topics:
Health Reform, Coverage Trends, Health
PreviousDon’t Be Fooled: This Year’s Debt Limit Fight Is Frighteningly Different
NextWho Receives SNAP, and How Would the House Cuts Affect Them?
Stay up to date
Receive the latest news and reports from the Center