“Moving to Work” Compromise Would Cut Risk from Expanding Demonstration

Major legislation to reform low-income housing assistance programs could include a significant, and risky, expansion of the Moving to Work (MTW) demonstration, which gives 39 state and local agencies sweeping authority to operate outside the laws and regulations that normally govern the public housing and “Section 8” Housing Choice Voucher programs, we explain in a new paper.  Despite its name, MTW is a broad and unwise deregulation initiative that is not mainly focused on promoting self-sufficiency.

Some of the program’s advocates have urged Congress to expand the demonstration sharply without placing significant new limits on participating agencies — a proposal that could jeopardize funding for housing programs, weaken tenant protections, and leave needy families without assistance.  The Government Accountability Office and the Department of Housing and Urban Development’s (HUD) Inspector General also have raised serious doubts about expansion, based on concerns that HUD has not adequately evaluated and monitored the existing demonstration.

Consider just one risk of an unconstrained MTW expansion:  it could lead to the block-granting of most public housing and voucher funds.  History suggests that could mean less funding for the programs over the long run.

HUD funds MTW agencies today mainly through block grants, which provide a fixed dollar amount that is adjusted from year to year for inflation and give agencies broad flexibility in how to use the funds.  By contrast, non-MTW agencies receive voucher and public housing operating funds based on the number of families they assist; generally they must use the funds in the program for which the funds are appropriated.

The President and Congress have cut funding considerably for most block grant programs.  The 2013 funding levels for the four major housing block grants were sharply below their inflation-adjusted 2001 funding levels, even before the 5 percent sequestration cuts were applied (see graph).  Policymakers have raised funding, however, for the voucher program and Section 8 Project-Based Rental Assistance (PBRA) — the two largest non-block grant housing programs — to keep pace with factors such as growth in the number of vouchers and rent increases that exceeded general inflation in the economy. 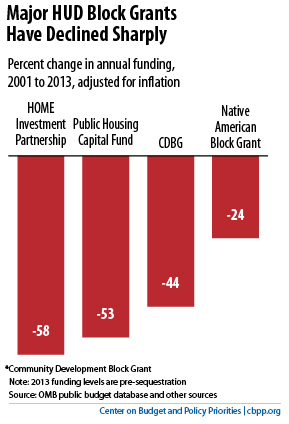 MTW block grants haven’t led to funding cuts so far.  But, currently, MTW covers fewer than one in eight vouchers and public housing units.  If the President and Congress expand MTW to the point where most units are funded through block grants, there is a strong chance that they will ultimately treat voucher and public housing operating funding more like they have treated housing block grant funding.  This could mean considerably deeper cuts in funding for state and local agencies, and ultimately, less assistance for needy families.

Legislation circulated last year by the House Financial Services Committee included a compromise that would expand Moving to Work but also reduce — though not eliminate — its potential adverse consequences by capping its scale, requiring rigorous policy evaluation, barring waivers of key tenant protections, and establishing a framework for the use of federal funds that would lessen the risk of cuts.  The President and Congress should expand MTW only if it’s critical to enacting broader legislation to strengthen federal rental assistance programs — but if so, these limits should be part of the plan.

January 13, 2012
PreviousRep. Brady’s Stunning Mischaracterization of the Estate Tax
NextSenate Appropriations Plan Wisely Says No to Sequestration
Stay up to date
Receive the latest news and reports from the Center