Health coverage under Ohio’s Medicaid expansion continues to improve the physical and mental health, financial well-being, and ability to work of low-income Ohioans, according to a new report from the state’s Medicaid agency based on a survey of beneficiaries and analysis of enrollment data. These findings are similar to what the state found in its previous survey in 2016 and further refute the Trump Administration’s rationale letting states take coverage away from people who don’t meet a work requirement — that it will encourage work and make people healthier. Taking coverage away — as some states’ proposals, including one pushed by Ohio’s legislature, would do — would have the opposite effect.

Specifically, the Ohio report finds that the state’s Medicaid expansion under the Affordable Care Act has: 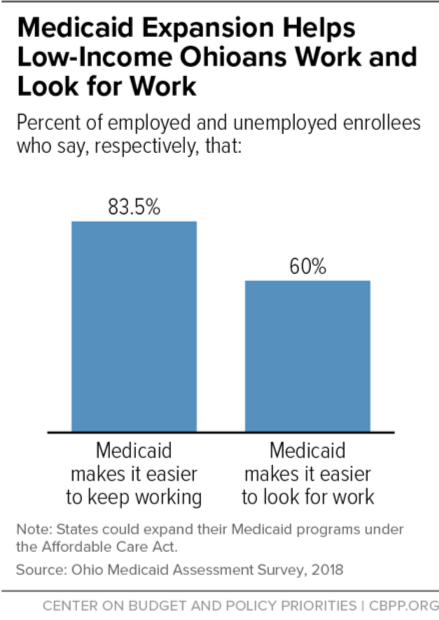 A companion analysis from the state’s Office of Management and Budget finds that coverage for the 654,000 people enrolled under the expansion comes at minimal cost to the state. That is, while the state will have to pay 10 percent of the expansion’s cost in fiscal year 2021, nearly 70 percent ($354 million) of that cost will be offset by savings in the budget from the expansion — such as lower spending on corrections (since enrolling people in Medicaid after they’re released from jail or prison decreases recidivism) and increased revenue from assessments on the managed care plans that serve the expansion population.

The Ohio findings mirror a large body of research from across the country finding that Medicaid expansion has lowered the uninsured rate, improved beneficiary health and financial well-being, and benefited state budgets.

Despite these positive findings, Ohio’s legislature has advanced a proposal for a federal waiver that would require expansion beneficiaries to work or participate in work-related activities for 80 hours a month or lose coverage. While people over age 50 and those caring for a child, in treatment for a substance use disorder, or in school at least half time would be exempt, tens of thousands of Ohioans would likely lose coverage under these policies. The state submitted this proposal to the federal Centers for Medicare & Medicaid Services (CMS) in April, and CMS could soon decide whether to approve it, as it has for similar proposals in Arkansas, Indiana, Kentucky, and New Hampshire.

For states that haven’t expanded Medicaid (such as Idaho, Nebraska, and Utah, where voters will decide in November whether their state should expand), the Ohio report demonstrates the benefits of Medicaid expansion for low-income residents and the state as a whole.

How Medicaid Work Requirements Will Harm Rural Residents – And Communities

March 10, 2020
PreviousIn Case You Missed It…
NextStates Can Help Ensure a Complete 2020 Census Count
Stay up to date
Receive the latest news and reports from the Center