While promising again that President Trump’s tax cut will focus on “middle-income” Americans and high-income Americans won’t get an overall tax cut, Treasury Secretary Steven Mnuchin now says that rule shouldn’t apply to the tax cuts that the wealthiest Americans will receive if policymakers repeal the Affordable Care Act (ACA). But his rule should apply to all major tax changes, including ACA repeal.

In an interview this week, the Treasury Secretary reiterated the “Mnuchin rule,” confirming that, on tax policy, the Administration’s “main objective is a middle-income tax cut on the personal side,” and that any cuts to tax rates for high-income households will be offset by reducing their other tax benefits. But he also said that “Obamacare and the Obamacare surcharges are going to be dealt with as part of the Obamacare legislation and not tax legislation.”

But, by any definition, an ACA repeal is “tax legislation” — and it’s the kind of policy for which the Mnuchin rule is needed most. By eliminating the taxes that help finance the ACA’s coverage expansions for low- and middle-income households, Republican proposals to repeal the ACA would deliver windfall tax cuts to millionaires.

In particular, eliminating two ACA Medicare taxes that fall only on high-income filers — the additional Hospital Insurance tax on high earners and the Medicare tax on unearned income — would cut taxes on millionaires by nearly $50,000 apiece on average (2.2 percent of after-tax income) in 2017, according to Tax Policy Center estimates (see chart). The top 400 highest-income households, whose incomes averaged $318 million in 2014, would receive about $7 million apiece on average, while households earning less than $250,000 a year ($200,000 for single filers) would get nothing from eliminating these two taxes. At the same time, an ACA repeal could raise taxes on millions of low- and moderate-income families if the premium tax credits they use now to help buy health insurance and go to the doctor are eliminated or replaced with smaller tax credits.

In short, ACA repeal would violate the Mnuchin rule both by cutting taxes sharply for the wealthy and by potentially increasing taxes on working families.

With the Mnuchin rule, Secretary Mnuchin laid down an important tax policy principle. It should apply to all legislation with major tax changes. 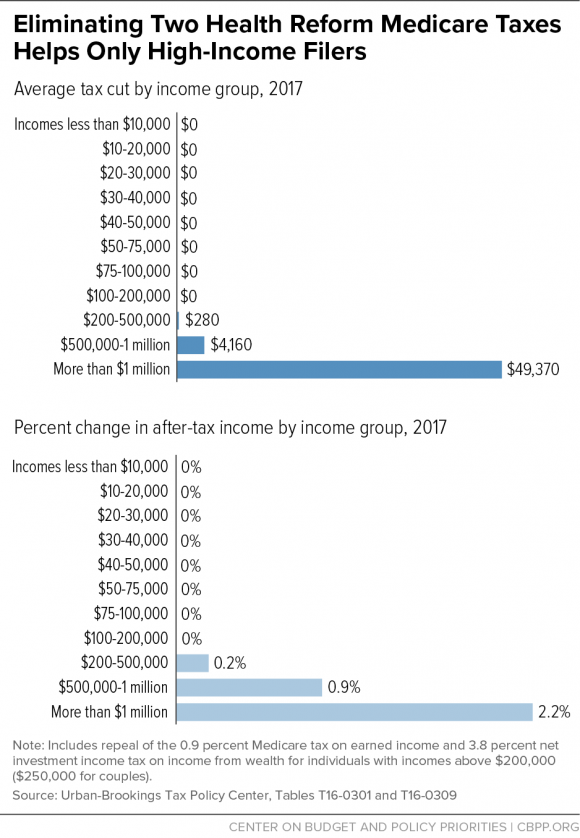 January 12, 2017
PreviousTrump Child Care Policies Could Hurt, Not Help, Working families
NextIn Case You Missed It…
Stay up to date
Receive the latest news and reports from the Center