Missouri voters on Tuesday approved a constitutional amendment to prohibit the state from ever broadening its sales tax base — and that of local governments — beyond what was subject to the tax as of January 2015.  That will lock in the state’s inequitable taxation of goods and services and hamstring its future revenue-raising capacity.

As I’ve explained, states should broaden their sales tax bases to include services both for tax fairness and long-run revenue adequacy.  Sales taxes are intended to tax consumption — i.e., what people buy (with necessities like food and health care often exempted).  Government shouldn’t tax people more heavily simply because they spend more on goods than services, but that’s what not taxing services does.  Worse, the services themselves are often close substitutes for goods that are taxed.  There’s no reason to tax a lawnmower but exempt a lawn-care service, or to tax a book or DVD bought in a store but not the same book or movie downloaded from Amazon.  Missouri’s constitutional amendment locks these kinds of inequities in place.

More worrisome is the amendment’s effect on the state’s future ability to raise revenue through its sales tax.  As the graph shows, household spending has steadily shifted away from items that comprise the sales tax base in most states (physical goods except for food plus restaurant meals) and toward services. 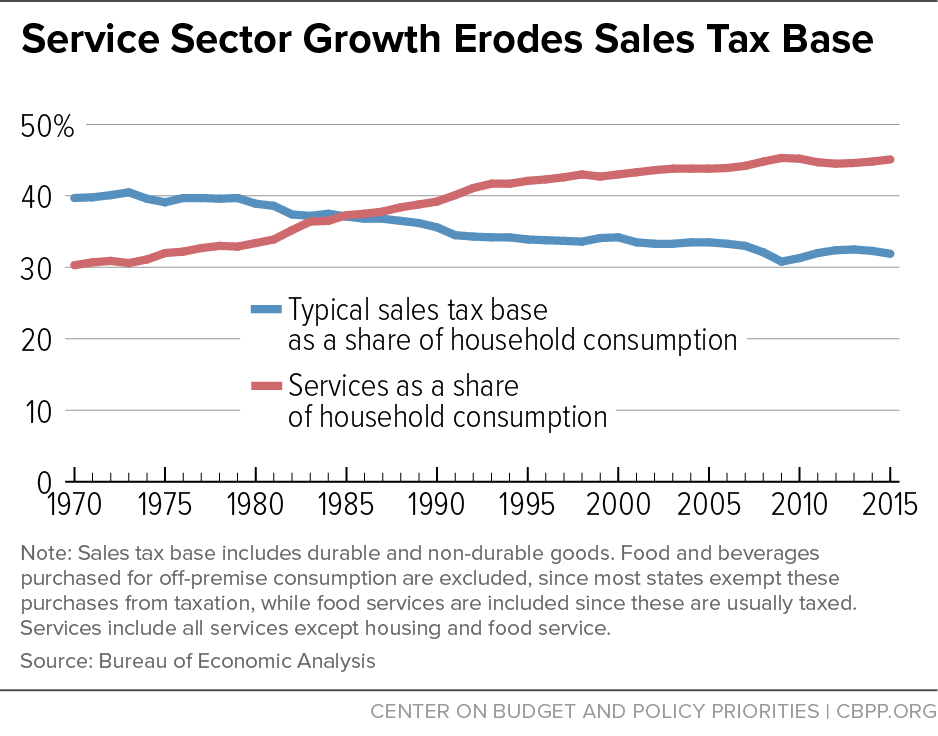 One consequence has been a slow but steady upward trend in state sales tax rates, as states struggle to maintain the tax’s revenue with a shrinking base.  But states can’t raise rates forever; for one thing, higher rates drive more people to shop online — where purchases often aren’t taxed — or in neighboring states with lower (or no) sales taxes.  Sales tax revenues will continue to fall further behind the cost of the services that they’re expected to fund, with states forced to cut critical services like education or raise other taxes to compensate.  The sales tax’s declining yield is especially troublesome given long-run concerns about the cost of providing services to an aging population, massive deferred investment and maintenance of roads, schools, and other infrastructure, and underfunded employee pension plans in some states.

By permanently freezing the sales tax base in the state’s constitution, Missouri voters have guaranteed that some combination of sales tax rate increases, other tax increases, and service cuts lies ahead.

Myth and Reality on State Income and Sales Taxes

November 15, 2011
PreviousVeterans and the Safety Net
NextMore States Legalize and Tax Marijuana
Stay up to date
Receive the latest news and reports from the Center