Sharply reversing longstanding federal policy, the Centers for Medicare & Medicaid Services (CMS) announced today that states may block some low-income adults from getting Medicaid coverage if they’re not working or participating in work-related activities. Under prior administrations, CMS (a part of the Department of Health and Human Services) rejected several state requests to tie Medicaid eligibility to such requirements, including Arizona’s 2016 request that CMS rejected because it “could undermine access to care and [does] not support the objectives of the Medicaid program.” CMS’ new guidance doesn’t provide a convincing rationale for the policy reversal, which could threaten Medicaid coverage for many adults and actually make it harder for some adults to succeed in the labor market due to their loss of health coverage.

Medicaid’s core mission is to provide comprehensive health coverage to low-income people so they can get needed health services. Section 1115 of the Social Security Act allows states to deviate from certain federal Medicaid requirements, but only when necessary to implement demonstration projects that promote Medicaid’s objectives.

The new guidance largely tries to justify Medicaid work requirements by citing research showing that people with jobs have better health and higher incomes than people without jobs. But that research doesn’t show whether employment causes improved health or rather, as is likely for many people, the causal relationship is in the other direction — namely, that healthy people are likelier to have jobs than those in poor health. (As one study that CMS cites explains, “Importantly, these findings do not necessarily imply that income has a causal effect on life expectancy: that is, giving someone more money may not increase their lifespan.”) Moreover, 36 percent of Medicaid beneficiaries who don’t qualify for federal disability assistance and who aren’t working report that it is a health condition that keeps them from working, the Kaiser Family Foundation reports (see chart). 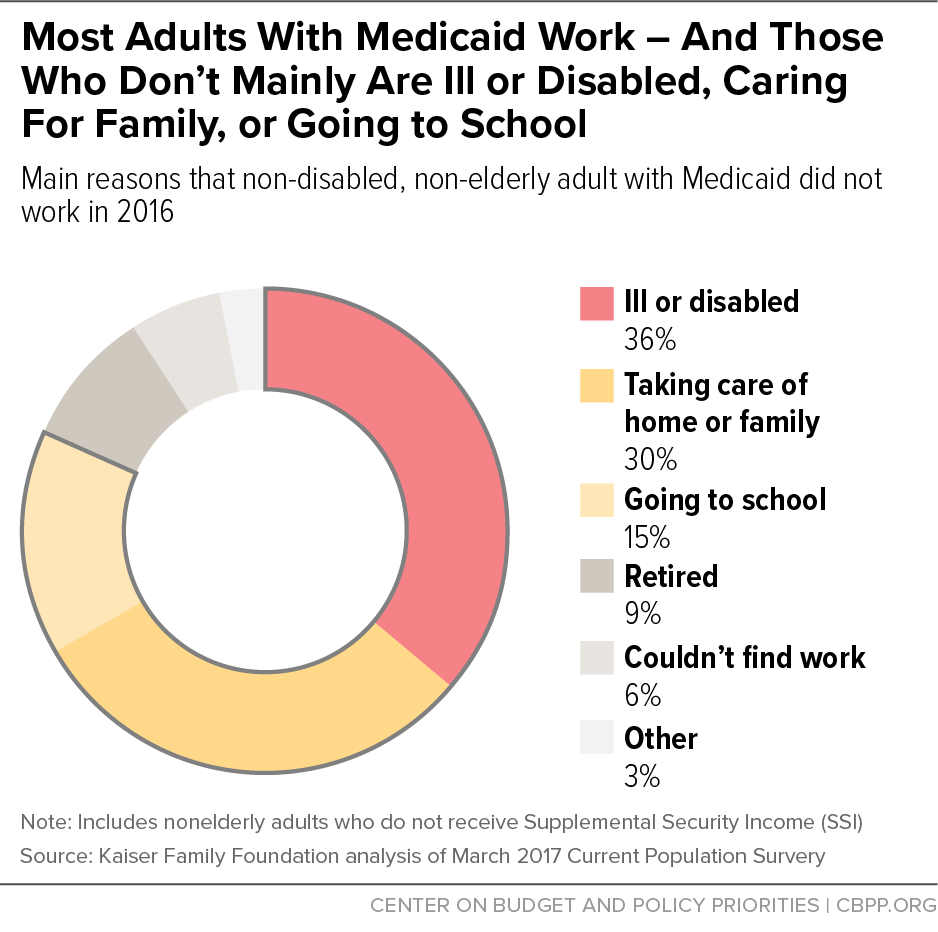 The CMS guidance also seeks to justify the new policy by noting that “Medicaid already supports a number of state programs designed to connect beneficiaries living with disabilities to work and maintain Medicaid coverage as their incomes increase.” Those programs include supported employment programs, which give people services that they need in order to work, and Medicaid buy-in programs, which let people with disabilities who are working maintain Medicaid coverage as their income rises. But these programs are effectively the opposite of a work requirement, not an argument for it: they help people with disabilities maintain Medicaid coverage if they get a job and their earnings rise, whereas a work requirement would block people from coverage if they aren’t working or don’t participate in a work program that may be a poor match for their needs. (In addition, the current work-supporting programs are voluntary, not a condition of eligibility.)

The bottom line is that the CMS guidance provides no real evidence that work requirements will promote Medicaid’s objectives. Indeed, there are strong reasons to believe that work requirements will reduce access to health care and thereby make it harder for some people to work. Pending waiver applications from states seeking to impose work requirements themselves acknowledge that thousands of people will lose health coverage as a result, which is consistent with experience from Temporary Assistance for Needy Families and SNAP (formerly food stamps). In those programs, considerable numbers of people who were already working or who should have qualified for exemptions from work requirements lost benefits nonetheless, as a result of being judged not to have met various paperwork requirements. In Medicaid, this means that beneficiaries could lose access to needed medical care — including care that can be life-sustaining — because of red tape.

Moreover, while the CMS guidance applies to people who are eligible for Medicaid “on a basis other than disability,” many people with chronic health conditions gained Medicaid coverage through the Affordable Care Act’s Medicaid expansion. Many of them may not be exempt from the work requirement because they don’t meet the strict federal disability criteria — even though they may well have health conditions that prevent them from working, such as a mental health condition or an injury.

In studies of adults who gained coverage in Ohio and Michigan under the Affordable Care Act’s Medicaid expansion, majorities said that gaining health coverage has helped them look for work or remain employed. Losing coverage — and, with it, access to mental health treatment, medication to manage chronic conditions, or other important care — could have the perverse result of impeding future employment. This would be particularly problematic for those with substance-use disorders such as opioid addiction. Care that Medicaid provides can give such individuals access to needed treatment. Many individuals with substance use disorders, however, may have difficulty meeting work requirements — and many may not be eligible for an exemption, or may be afraid to disclose their conditions to Medicaid eligibility workers and have their health coverage (and the potential for treatment) cut off.

Finally, it’s also important to recognize that most Medicaid beneficiaries who can work are already working — nearly 8 in 10 non-disabled adults with Medicaid coverage live in working families, and most are working themselves. The vast majority of those who are not working have health conditions that prevent them from working, are taking care of their home or family (often caring for children or other family members who are ill or have a disability), or are in school. Many of those who aren’t working face significant challenges, and requirements that can lead to the loss of health care — with potentially serious health consequences — are not the way to address them.

Medicaid Waivers Should Further Program Objectives, Not Impose Barriers to Coverage and Care

The Empty Promise of Work Requirements

January 8, 2018
PreviousWork Requirements Don’t Work
NextWashington Waiver Shows How Medicaid Can Support Work
Stay up to date
Receive the latest news and reports from the Center