| By Chris Mai
As our recent paper found, 34 states are providing less funding — often much less — to K-12 schools than they did before the recession (see chart).  Some have argued that federal and local governments stepped up to offset the state-level cuts.  But, that’s not the case. The most recent comprehensive data for total education funding through 2011, from the Census Bureau, show that total per-student school funding (federal, state, and local) declined between 2008 and 2011 in most of the states that we reported had cut general state aid. That’s remarkable because school districts received big funding boosts during that time from the 2009 Recovery Act and a later, smaller supplemental bill.  Also, local property tax collections had yet to feel the full brunt of the bursting of the housing bubble.  As it turns out, the federal aid plus pre-bubble local funding fully compensated for lost state aid in only 14 of those states between 2008 and 2011.  (The stimulus funding was nonetheless important; without it, total spending would have increased in only five of the states that have cut state aid.) The Recovery Act’s funding has since ended.  And more recently, the federal government has cut ongoing federal education support.  Federal funding for high-poverty schools — the Title I program — is down 12 percent since 2010, and funding for educating children with disabilities is down 11 percent, as we’ve explained.  In other words, while federal funding helped compensate for some state funding cuts in the first years after the recession hit, federal changes are now a drag on total funding for schools. Local governments generally can’t make up for deep cuts in state aid, either, since property tax revenues — the main source of local funding for schools — remain depressed by the housing bubble’s implosion, now fully accounted for in local property tax collections.  Nationwide, property tax revenues in the 12 months ending in June 2013 were 2.6 percent below 2011 levels, adjusted for inflation. With federal aid declining and local funding hobbled, schools in states that have slashed state support have nowhere to turn.  As a result, they’ve been forced to lay off teachers, librarians, nurses, and other school workers; increase class sizes; reduce the length of the school year; and make other cuts that make it harder for them to educate the nation’s children.
Image 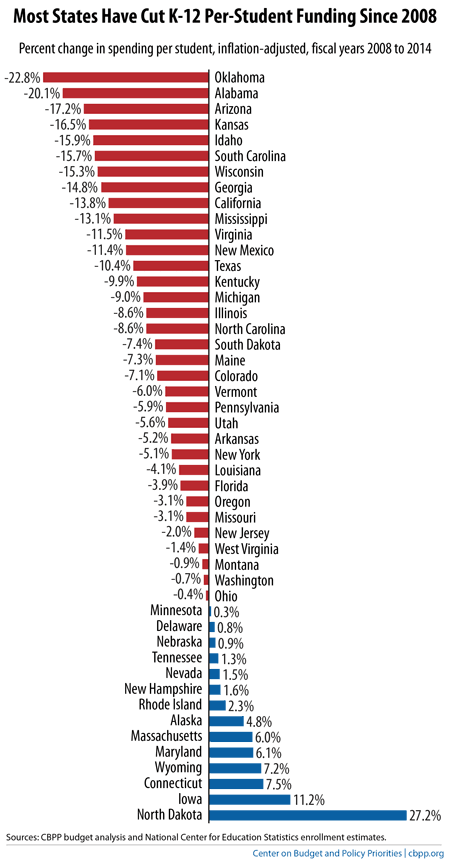