Cuts in Federal Aid to States Dragging Down School Funding

| By Chris Mai
About two-thirds of states are providing less funding per student for the current 2013-14 school year than they did before the recession, as we explained in our recent analysis of state school funding.  Among the reasons why:  the federal government cut its own aid to states, leaving them with fewer dollars to pay for growing school costs. States used emergency fiscal relief from the federal government (including education aid and other forms of state fiscal relief) to cover a significant share of their shortfalls through fiscal year 2011.  The federal government then largely allowed this aid to expire, even though states continued to face very large shortfalls in 2012 and beyond.  That’s a key reason why state education funding dropped so sharply in 2012 and remains at such low levels. Adding to states’ struggles, federal policymakers have cut ongoing federal funding for states and localities through sequestration and the cuts required by the 2011 Budget Control Act, worsening state fiscal conditions.  For example, since 2010, federal spending for Title I — the major federal assistance program for high-poverty schools — is down 12 percent after adjusting for inflation, and federal spending on special education is down 11 percent (see chart).
Image 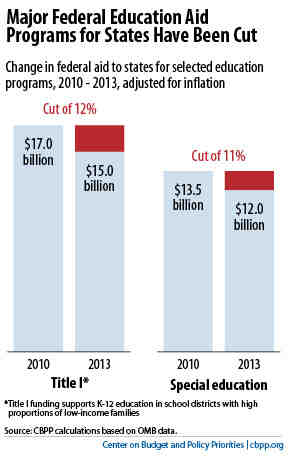 If local school districts could easily raise the money needed to replace lost state aid, then the damage wouldn’t be so great.  But that’s not the case.  Many of the nation’s real estate markets are still weak, making it tough for many school districts to raise more money from the property tax — the primary source of local school funding — as property values rise.  Local governments could raise property tax rates, but that’s often politically very difficult, especially with the economy still so weak. So, local governments generally aren’t making up for state and federal funding cuts. When states cut funding, local school districts end up with less.  The short-term results: shorter school years, less summer school, and layoffs that slow the economy’s recovery from the recession. The long-term savings from today’s cuts may cost much more in diminished economic growth.  To prosper, businesses need a well-educated workforce.  These deep education spending cuts will weaken that future workforce by diminishing the quality of elementary and high schools.  At a time when the nation needs to produce workers with the skills to master new technologies and adapt to the growing complexities of a global economy, large cuts in funding for basic education undermine a crucial building block for future prosperity.
Related Posts:
Topics:
State Budget and Tax