Senate Finance Committee Chairman Baucus released another discussion draft on tax reform today, this one on accounting issues.  It not only eliminates some major corporate tax subsidies but refuses to use these changes as timing gimmicks to promote deficit-expanding rate cuts.  These are valuable markers for the tax reform debate.

As we’ve explained, the savings from limiting or ending certain corporate tax expenditures shrink over time.  By contrast, the revenue loss from cutting tax rates grows over time.  So, a tax reform package that uses tax expenditure changes to “pay for” rate cuts might be revenue neutral within the ten-year budget window but lose significant revenue after that.  The discussion draft avoids that risk, stating that corporate reform should be revenue neutral in the long run.  That is, it should not use temporary revenues to try to finance permanent rate cuts.

This is a critical fiscal test, because the discussion draft calls for changes in two tax breaks that we’ve warned could easily be used as timing gimmicks because they raise much more revenue in the first ten years than in later years.

The first tax break is “last-in, first-out” (LIFO), an accounting method that (as we have explained) generally allows firms to report lower taxable profits and therefore pay less in taxes.  The discussion draft would eliminate LIFO — a sound idea, as LIFO is inefficiently targeted.  Chairman Baucus hasn’t yet released Joint Tax Committee estimates of his plan, but a Congressional Budget Office analysis of a similar proposal to repeal LIFO clearly shows that much of the revenue gain is one-time only (see chart). 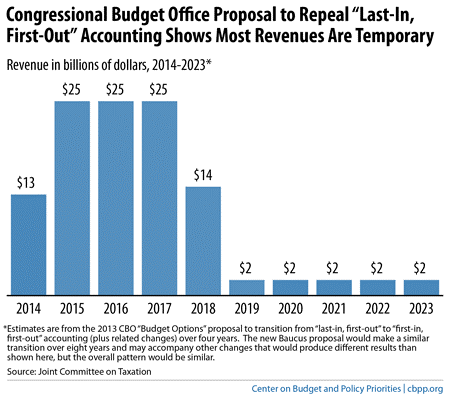 Commendably, the discussion draft would not use any temporary revenues from ending LIFO to finance corporate rate cuts.  Only the permanent revenues would go to rate cuts.

The second example is accelerated depreciation.  One of the largest corporate tax subsidies, it allows companies to deduct over time the cost of investments such as new equipment at a faster pace than those assets actually lose value.  Replacing accelerated depreciation “with a system that better approximates economic depreciation” is a central element of the discussion draft.

This change, too, would raise more revenue in the first ten years than in decades after that, but the discussion draft wouldn’t pretend to pay for permanent rate cuts with those temporary revenues.

While we would prefer a corporate tax reform package that raises revenue over the long term rather than one that aims for revenue-neutrality, like the Baucus draft, it is commendable that Chairman Baucus drew a hard, fiscally responsible line against using timing gimmicks to weaken the nation’s long-term fiscal health.

For example, the discussion draft would eliminate the tax code’s “like-kind” exchange provision.  The sale or exchange of property for money or other property generally triggers capital gains tax, but no tax is levied on the exchange of property for what the tax code loosely defines as “like-kind” property.  Congress apparently intended this tax break to exempt small-scale and informal barter transactions from taxes and the attendant reporting requirements.  But it is now used on a much broader scale and has become subject to abuse.

As the New York Times has written, like-kind exchange now “provides subsidies for rental truck fleets and investment property, vacation homes, oil wells and thoroughbred racehorses, and diverts billions of dollars in potential tax revenue from the Treasury each year.”  The Baucus discussion draft would end this inefficient subsidy.

Student Loans Are a Good Deal for Students and the Government

Who’s to Blame for the Slow Economy?