Last Year’s Drop in Poverty Only the Second Since 2000

The decline in the official poverty rate last year from 15.0 percent to 14.5 percent is especially welcome because it follows a decade and a half of mostly rising or stagnant poverty rates, our detailed look at the new Census figures explains.  Before 2013, the official poverty rate fell only once since 2000 (see chart).  Still, at the current rate of progress — which was hampered in 2013 by slow job growth and austerity policies — poverty won’t return to its pre-recession level of 12.5 percent until about 2017. 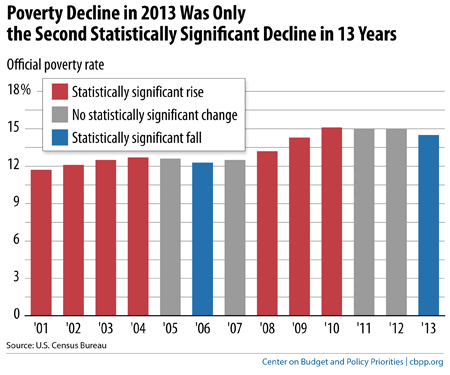 Some 45.3 million Americans were poor in 2013, the Census figures show. As in other recent economic recoveries, relief from poverty has been slow to arrive.  Last year was the fourth full year of the current recovery (which began in June 2009) but the first year in which poverty fell. In the previous business cycle, poverty didn’t decline until the fifth full year of recovery, 2006.  In the recovery before that, poverty didn’t decline significantly until the third year, 1994.  By contrast, in the recoveries in the 1960s, 1970s, and 1980s, poverty started falling within two years of the recession’s end. Two reasons why poverty didn’t fall more in 2013 were the lack of faster job growth and austerity policies that dampened the labor market’s recovery. In 2013, the economy produced barely enough jobs to outpace population growth.   Only 67.4 percent of the working-age population (people aged 16 to 64) was employed that year, just slightly higher than in 2012 (67.1 percent), according to previously released Labor Department figures. In response to low employment, policymakers could have created jobs, such as by expanding infrastructure investments or reinstituting the temporary Recovery Act funding that states used in 2009 and 2010 to place 260,000 low-income parents and youth into jobs.  Instead, they adopted austerity policies that constrained consumer spending and job growth, including sequestration budget cuts that cut most discretionary programs by 5 to 8 percent in 2013.  They also allowed a payroll tax holiday to expire after December 2012; for most workers, the expiration lowered take-home pay by 2 percent of earnings.  A third policy decision, to allow tax cuts for very-high-income individuals to expire at the end of 2012, mattered less for consumer demand, as their level of consumer spending is less sensitive to tax changes. The Congressional Budget Office projected in early 2013 that, together, these measures would reduce economic growth over the year by about 1½ percentage points and lower employment by more than 1 million jobs.  Goldman Sachs similarly estimated that changes in government spending and taxes in 2013 cost the economy 1.1 percent of gross domestic product.