Just the Basics: Where Our State Tax Dollars Go

As Tax Day approaches, we’ve updated several backgrounders that explain how the federal government and states collect and spend tax dollars.  As policymakers and citizens weigh key decisions on how best to shape our future government, it’s helpful to examine where the dollars that comprise the budget come from and where they go.

The final installment in our series of revised “Policy Basics” backgrounders explains where our state tax dollars go.

In total, the 50 states and the District of Columbia spent a little more than $1 trillion in state revenues in fiscal year 2012, according to the most recent survey by the National Association of State Budget Officers.  (This figure does not include the federal funds that states also spent that year.)

By far the largest areas of state spending, on average, are education (both K-12 and higher education) and health care.  But states also fund a wide variety of other services, including transportation, corrections, pension and health benefits for public employees, care for persons with mental illness and developmental disabilities, assistance to low-income families, economic development, environmental projects, state police, parks and recreation, housing, and aid to local governments (see chart). 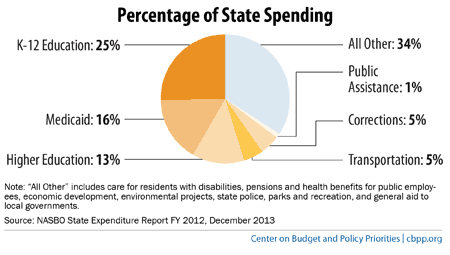 The figure above shows how states spend their tax dollars on average for the entire country.  But the specific mix of spending varies from state to state, depending on such factors as how the state and its localities share funding responsibilities for public services and how much state policymakers choose to invest in health care, education, and other areas.

Just the Basics: Where Our Federal Tax Dollars Go

April 7, 2014
PreviousRyan Budget Gets 69 Percent of Its Cuts From Low-Income Programs [Updated]
NextObama Plan to Raise Rents on Rural Poor is the Wrong Way to Save Money
Stay up to date
Receive the latest news and reports from the Center