We’ve repeatedly warned about the serious damage that deep IRS budget cuts have caused, including an erosion in taxpayer services and enforcement.  John Oliver’s HBO show last night featured an informative — and entertaining — segment on the issue (warning: colorful language!).  As Oliver mentioned and our paper explains (albeit less crudely), the IRS plays a fundamentally important, and often underappreciated, role in our government by collecting nearly all the revenue that funds federal programs on which Americans rely.

Policymakers have cut the IRS budget sharply since 2010 while giving the IRS significant new responsibilities.  As Michael Bolton crooned on Oliver’s show, these cuts have forced the agency to significantly cut its workforce and scale back employee training, which, in turn, has compromised taxpayer service and eroded enforcement activities.  As Tax Day approaches, the IRS is answering fewer than half of taxpayer calls and only responds to “basic” tax questions for those who get through.  And the IRS estimates that individual and business audit rates have fallen to their lowest levels in a decade.  Such cuts actuallyincrease the budget deficit, since each additional $1 spent on IRS enforcement yields $6 or more of additional revenue from collecting taxes owed under current law, according to the Treasury Department.

As Oliver noted, the U.S. tax system is based on trust and voluntary compliance.  Large IRS funding cuts threaten to undermine this system, with potentially drastic consequences.  Even a 1 percent decline in voluntary compliance would reduce revenue by $30 billion a year, according to IRS Commissioner John Koskinen.  Cutting the IRS budget threatens the government’s ability to fund important programs, from national defense and safety net programs, to roads, science research, and education (see chart). 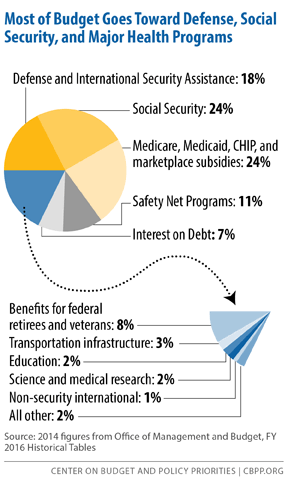 As Tax Day approaches, Oliver’s segment provides one more reminder why policymakers should give the IRS the resources to perform its vital functions.

April 1, 2015
PreviousFour Facts About the Tax Code’s Marriage Penalties — and Marriage Bonuses
NextFood Pantries Expect Longer Lines as SNAP Limit Kicks in
Stay up to date
Receive the latest news and reports from the Center