Today’s Washington Post (see here and here) and Bloomberg feature must-read articles showing that deep cuts to the IRS budget since 2010 have prevented it from serving taxpayers adequately this filing season.  The new House and Senate budget plans would likely lock in these damaging cuts — or worse — over the next decade.

As we’ve written, the IRS budget has shrunk by 18 percent since 2010, adjusted for inflation, even as its responsibilities have grown.  This has forced the agency to cut its workforce and employee training, which has eroded taxpayer services and enforcement of the nation’s tax laws. 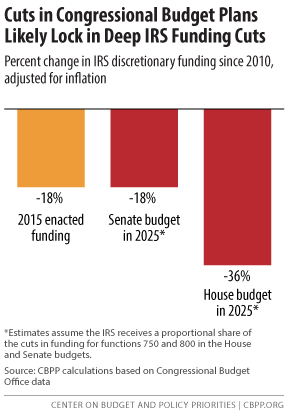 The Senate budget would do nothing to reverse the cuts, with IRS funding likely remaining at these sharply reduced — and inadequate — levels over the next decade.  The House budget would likely impose more cuts, bringing the total reduction in funding since 2010 to 36 percent by the end of the decade (see graph).  Our calculations assume that the IRS would receive a proportional share of the budgets’ cuts.  If it received a disproportionate share, as some congressional Republicans’ recent criticisms of the agency suggest, the overall drop in IRS funding would be even deeper.

Such cuts harm honest taxpayers while rewarding tax cheats.  As the Post and Bloomberg articles note, taxpayer service has fallen precipitously; the agency is answering fewer than half of phone calls this filing season, for example.  This hurts taxpayers trying to comply with the complex tax code.

Meanwhile, cutting enforcement funding weakens the IRS’ ability to curb tax fraud, tax evasion, and other illegal activities.  It also increases deficits.  Each additional $1 spent on IRS enforcement yields $6 or more of additional revenue from collecting taxes owed under current law, according to the Treasury Department.

Large cuts in IRS funding also threaten to undermine the system of voluntary compliance on which our tax system is based.  As Bloomberg writes:

The fear in the IRS is that vilification of the service will hurt Americans’ high voluntary compliance, which makes the country more financially stable than, say, Greece, where much of the population declines to pay taxes altogether.  Beleaguered IRS workers worry that citizens will test the system to see what they can get away with.  “Once you go in that direction,” it’s not an on/off switch, [IRS Commissioner John] Koskinen says.  “You can’t turn it around the next day. . . .”

The President’s budget charts a better course by starting to reverse the recent cuts and funding needed investments in taxpayer services, enforcement, and information technology.  If policymakers don’t give the IRS what it needs to fill its essential role and growing responsibilities, we can expect many more troubling stories like these.

January 14, 2015
PreviousKansas Bill Will Increase Burdens on TANF Families
NextTax Season: Time to Help the Lone Group Taxed Into Poverty
Stay up to date
Receive the latest news and reports from the Center