It’s Time to Invest in Schools

The country is $46 billion a year behind what it should spend on building and repairing K-12 schools to provide healthy and safe modern facilities, a new report from the 21st Century School Fund, the National Council on School Facilities, and the U.S. Green Building Council finds.  This neglect hurts students’ health and school performance — and by extension, weakens the country’s long-term prosperity, as we noted in our recent paper on the nation’s declining infrastructure investments.

And while underinvestment in school buildings has occurred nationwide, the disparity between low- and higher-income communities is pronounced.  The wealthiest school districts spent almost three times as much per student on school facility improvements than the poorest districts between 1995 and 2004, according to a separate study of almost 150,000 school improvement projects.  As a result, a higher percentage of public schools in poor areas need repair than those in wealthier places, the National Center for Education Statistics has noted (see chart). 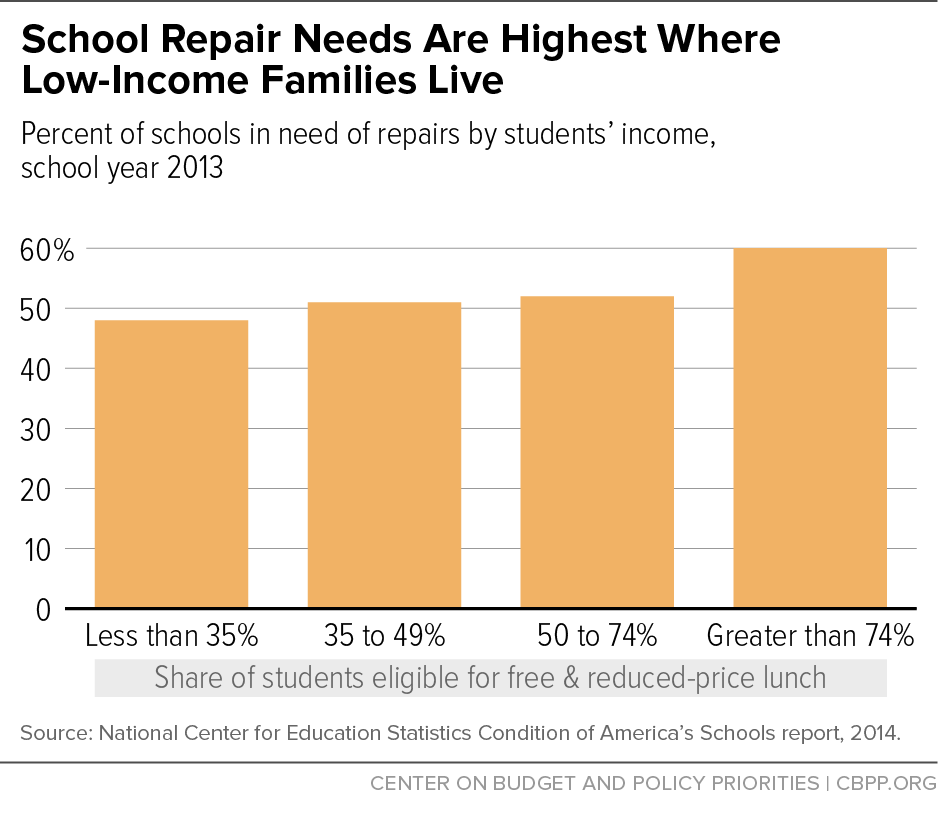 Further, when states allow their school buildings to fall into disrepair and fail to keep up with the need for new school construction, they add to the damage from other state funding cuts to schools, as my colleague Jared Bernstein points out.  Most states provide less non-capital support per student for elementary and secondary schools — in some cases, much less — than before the Great Recession, as we detail in a recent paper.  Even worse, some states are still cutting.

Reversing this decline is key to creating good jobs and promoting full economic recovery.  It’s time for states to recognize the short-sightedness of these trends and prioritize investment in all aspects of K-12 education.

States Can Balance Investments in Infrastructure and Other Priorities