In Illinois, a Chance to Fix a Constitutional Flaw 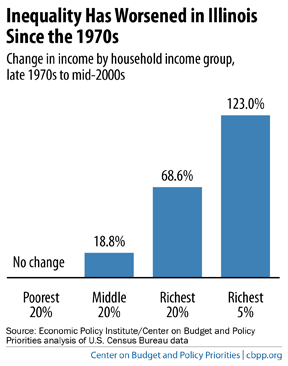 When Illinois enacted the single-rate rule in 1970, the income gap between the wealthy and everyone else nationwide had been falling for several decades.  Since the 1970s, however, the top 5 percent of Illinoisans’ incomes have

In other words, most of the income benefits of the state’s economic growth since 1970 have accrued to the wealthy, and Illinois today has the nation’s ninth-highest level of income inequality.

The single-rate income tax is bad enough for middle-income households.  Other major revenue options, like sales or property tax increases, are even tougher on low- and middle-income families.  Indeed, accounting for all forms of state and local taxation, the Institute on Taxation and Economic Policy reports that Illinois’ tax structure is the nation’s fourth most lopsided in favor of those with high incomes, with the top 1 percent of taxpayers (with average income of $1.5 million) paying less than half as much of their income in taxes than the 80 percent with incomes below $93,000.

In part because of its limited revenue options, Illinois for many years did not raise enough tax dollars to cover its costs.  The state accrued nearly $10 billion in unpaid bills to doctors, child care centers, and other service providers, and it fell far behind on its pension payments. A temporary income tax increase enacted in 2011 has helped the state to slash the backlog of unpaid bills, but the state’s fiscal challenges remain large.

Nor has the flat-rate requirement helped Illinois’ economy.  Unemployment in Illinois remains well above the national average, and much higher than neighbors like Minnesota and Missouri that have multi-rate taxes.  (In fact, Minnesota last year raised taxes on its highest-income residents, with no economic harm, contrary to opponents’ predictions.)  A plethora of academic studies, as well as states’ direct experience, show that personal income tax rates have essentially no relationship to economic growth.

In the coming days, Illinois’ legislature will consider whether to give voters the option of fixing the flawed single-rate mandate.  A proposed constitutional amendment would enable Illinois to impose different rates on different levels of income, an option that all but a handful of other states already have.  This change could allow the state to fully pay its backlog of bills; better fund schools, parks, and roads; or meet other needs without imposing the greatest burden on middle-income Illinoisans.

States' Very Good Deal on Expanding Medicaid Gets Even Better