Update, February 12: We’ve updated this post (including the graph) to reflect action by the House Ways and Means Committee.

We’ve warned that the bill before the House today to make permanent various tax breaks related to charities would be the start of a costly, fiscally irresponsible series of permanent tax cuts. Proving our point, the Ways and Means Committee approved bills today making permanent two other “tax extenders” (several dozen mostly corporate tax breaks that policymakers routinely extend a year at a time) and significantly expanding one of them — all without offsetting their substantial cost.

As our paper explains, making the extenders permanent without paying for them is costly, biases tax reform against reducing deficits, and prioritizes corporate tax breaks over tax credits that help millions of low- and moderate-income working families. This is why policymakers should reject today’s package of charitable provisions, regardless of whether they support it on policy grounds. 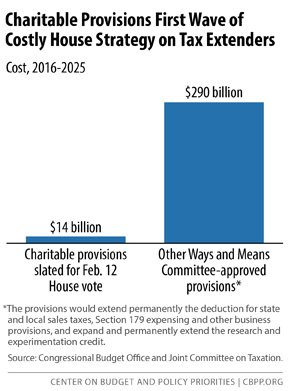 The President, whose budget modifies and expands some charitable tax provisions but offsets the cost, has threatened to veto today’s House package.

The two new extenders bills that Ways and Means approved are far costlier than the charitable provisions. One bill expands and makes permanent one of the biggest tax extenders related to businesses, the research and experimentation credit (costing $177 billion over 2016-2025); the other makes permanent one of the biggest individual extenders, the tax deduction for state and local sales taxes (costing $42 billion).

The total price tag of the bill before the House, the two new Ways and Means bills, and business provisions that the full House will consider tomorrow is $304 billion (see chart).