In their ongoing assault on health reform, House Republicans have now attached two provisions to a Senate-passed bill to fund the government in fiscal year 2014 that would halt aspects of the Affordable Care Act (ACA).

The first provision would delay health reform’s individual mandate — which will require most Americans to obtain health coverage or pay a penalty starting in 2014 — by a year; the second would bar the government from contributing to health insurance premiums that members of Congress and their staffs pay.

CBPP recently has written analyses of these proposals, explaining why both are a bad idea: 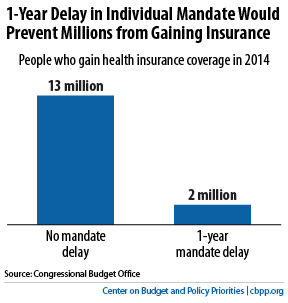 Delaying the Individual Mandate Would Result in Millions More Uninsured and Higher Premiums:  A one-year delay in the individual mandate would cause 11 million more Americans to remain uninsured in 2014 and result in higher premiums for many others.  It also would disrupt the new health insurance exchanges just as the open enrollment season is about to begin.

No, Health Reform Doesn’t Give Congress Special Treatment:  The Obama administration is not giving members of Congress and their staffs special treatment under the ACA, contrary to some health reform opponents’ claims.

September 12, 2013
PreviousNo, Health Reform Doesn’t Give Congress Special Treatment
NextHealth Insurance Exchanges Are Open for Business
Stay up to date
Receive the latest news and reports from the Center