A new Urban Institute analysis concludes that a one-year delay in the individual mandate, which Congressional Republican leaders may add to debt ceiling legislation, would lead to greater numbers of uninsured, higher premiums, and more uncompensated care.  Urban also finds that such a delay would create serious problems for the new health insurance exchanges, just as the open enrollment season is set to begin on October 1.

While Urban finds that the Administration’s one-year delay in the employer responsibility requirement would have little or no effect on coverage or premiums, it says that assuming that a similar delay in the individual mandate would produce similar effects would be “dangerously wrong.”

We reached the same conclusions in our recent analysis, which warned that a one-year delay in the individual mandate would mean 11 million more uninsured people and higher premiums for many others in 2014, according to a recent Congressional Budget Office analysis.

The table below from the Urban Institute summarizes its assessment of the harmful impact of a delay in the individual mandate, compared with a delay in the employer responsibility requirement. 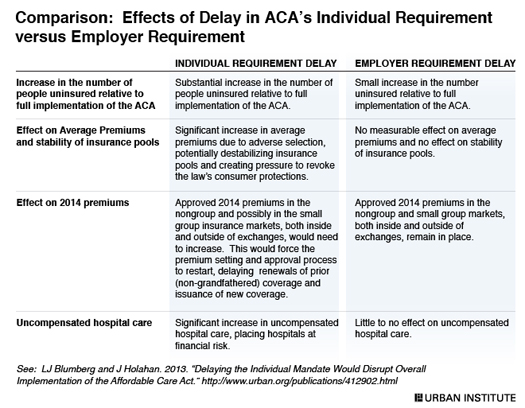 July 3, 2013
Previous5 Things We Learned From Census About Poverty, Income, and Health Insurance
NextStone: Political Gridlock and Brinksmanship Threaten Economic Recovery
Stay up to date
Receive the latest news and reports from the Center