“Taxes,” Oliver Wendell Holmes Jr. famously said, “are what we pay for a civilized society.”  His reflection comes to mind in light of legislation, which the House passed last week, that would make it simpler for Americans to make voluntary contributions to reduce the public debt.
Image 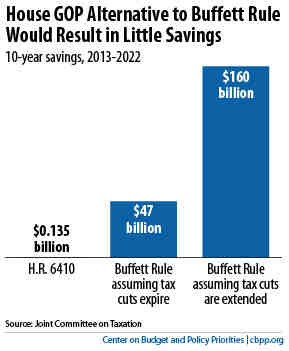 Though it’s called the Buffett Rule Act of 2012, the bill doesn’t merit the name.  The Buffett Rule says millionaires should not pay a smaller share of their income in federal tax than less well-to-do Americans (as many millionaires now do).  The House bill, however, wouldn’t change that.  Nor would it raise much money to reduce the debt. In fact, the congressional Joint Tax Committee estimates the bill would raise $135 million (that’s million with an “m”) over ten years.  That’s less than 1/1000th (or 0.1 percent) of the $160 billion Senator Sheldon Whitehouse’s proposal to implement the Buffett Rule would raise, assuming that policymakers will extend the tax cuts of 2001 and 2003 that are scheduled to expire in December.  It’s less than 1/300th (or 0.3 percent) of the still-respectable $47 billion that Senator Whitehouse’s proposal would raise, if we assume instead that policymakers will let those tax cuts expire on schedule. However inconsequential in fiscal terms, the House bill raises a serious point that’s related to Justice Holmes’ keen insight.  We should not treat taxes as an essentially voluntary largesse rather than as an obligation of citizenship.  You can’t run a country on donations. Lawmakers’ aversion to raising taxes — through a real Buffett Rule or other measures — to cover the spending that benefits all Americans inevitably leads to the deficits that these same lawmakers disparage.  The same mindset also can lead some lawmakers to go soft on measures to improve tax compliance. Higher taxes must be part of any balanced deficit reduction package, and the place to start is with the nation’s wealthiest households.