In recognition of Tax Day, we’ve collected our top ten charts related to federal taxes.  Together, they provide useful context for the coming debates about how to reduce soaring budget deficits and reform the tax code. Our first chart, below, reminds us what taxes pay for:  three-fifths of federal spending goes for national defense, Social Security, and major health programs like Medicare and Medicaid; the rest goes for safety net programs, interest on the debt, and a wide variety of other areas.
Image

Our second chart, below, shows that the United States (including both the federal government and the states) collects less in taxes as a share of the economy than nearly any other developed country.
Image

The next three charts show some of the factors that have made the United States a low-tax country.  They include the downward trend in taxes on middle-income families, the steep drop in federal taxes at the top of the income scale, and the decline in corporate income tax revenue as a share of the economy. As our third chart, below, shows, federal taxes on middle-income Americans are near historic lows, according to data from the Urban-Brookings Tax Policy Center (TPC): Overall federal taxes — which include income as well as payroll and excise taxes — are also near their lowest level in decades.
Image

As our fourth chart, below, shows, the share of their income that the country’s highest-income 400 taxpayers pay in federal income taxes has also fallen considerably since 1992, according to IRS data.  Over that same time, the incomes of those taxpayers has skyrocketed.  While the Great Recession (like the 2001 recession) caused a sharp drop in incomes at the top, the most recent data show that incomes at the top have since begun to rebound.
Image

As our fifth chart, below, shows, corporate tax revenues are at historic lows as a share of the economy.
Image

Although the top U.S. statutory corporate tax rate is high by international standards, the average tax rate — that is, the share of profits that companies actually pay in U.S. taxes — is substantially lower because of the many deductions, credits, and other write-offs that corporations can take.  U.S. corporate tax revenues are low compared to other developed countries as a share of the economy. The next two charts highlight critical facts to keep in mind when evaluating tax proposals. As our sixth chart, below, shows, the nation is on an unsustainable fiscal track if we continue current policies.  Higher tax revenues are an essential part of a balanced deficit-reduction package.
Image

As our seventh chart, below, shows, the top 1 percent of taxpayers have enjoyed enormous gains in after-tax incomes in recent decades, dwarfing the gains among other income groups.  (For more on the growth in income inequality, see our slideshow series.) The sharp growth in income inequality suggests that higher-income taxpayers can and should contribute more in taxes to help reduce deficits.
Image

As our eighth chart, below, shows, the 2001 and 2003 tax cuts benefit millionaires much more than middle-income households — a sign of how heavily they are weighted toward the top of the income scale.  A good start to raising revenues for deficit reduction would be to allow the tax cuts aimed exclusively at people earning over $250,000 to expire on schedule at the end of 2012.
Image 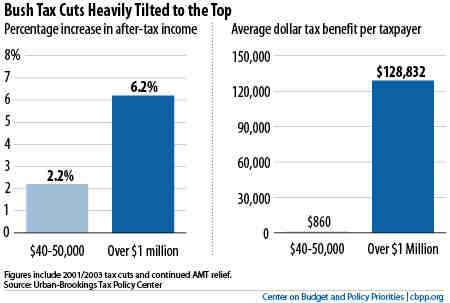 As our ninth chart, below, shows, policymakers can also can reduce deficits — and make the tax code more equitable and economically efficient at the same time — by reforming tax expenditures (tax credits, deductions, and other preferences).   Tax expenditures are expensive, costing $1.1 trillion in 2011 (more than Medicare or Medicaid), and in many cases they provide the biggest benefits to the people who least need them.
Image

As our tenth and final chart, below, shows, one of the most top-heavy tax expenditures is the preferential tax rates for investment income, which are much lower than the rates for wage income.  Since the large bulk of investment income goes to upper-income households, these preferential rates are the major reason why the tax code violates the “Buffett Rule” — in other words, why many middle-income Americans pay more of their income in taxes than some millionaires. Middle-income people who receive most of their income from their paychecks (as middle-class people generally do) pay 14.9 percent of their income in federal income and payroll taxes, according to TPC.  This is higher than the rate for people with incomes over $1 million who receive more than a third of their income from investments (that is, capital gains and qualified dividends).
Image