The House Republican tax bill increases the maximum child tax credit (CTC) to $1,600, from its current $1,000 per-child level.  The proposal, however, excludes millions of children whose parents work in low-wage jobs — even as it expands eligibility for higher-income families.  Since low-wage earning parents and their children are the people with the greatest need for the CTC, excluding them from the CTC expansion — especially while extending the CTC for the first time to many families with incomes between $150,000 and $300,000 — represents unsound policy.

Congress and President Clinton created the CTC in 1997; it has since been modified several times on a bipartisan basis.  Currently, the maximum per-child credit is $1,000, and the credit is available only to parents who work and earn income within certain ranges.  The CTC is partially refundable, meaning that it is partly, but not entirely, available to families with earnings too low to owe federal income tax. Specifically, the refundable portion of the CTC is limited to 15 percent of a family’s earnings over $3,000. At the upper end, the CTC begins to phase out (at a rate of 5 cents per additional dollar of income) for married couples making over $110,000.  It phases out entirely for a married family with two children when the family’s income reaches $150,000.

The House GOP bill would increase the maximum credit from $1,000 per child to $1,600 — but only for some households. It also would sharply increase the upper income limits of eligibility, so the credit wouldn’t begin to phase out for married filers until their income reached $230,000, and wouldn’t phase out completely until income reached $294,000 for a married couple with two children.

At the lower end of the income scale, the bill would deny most or all of the CTC expansion to millions of children whose parents work for low wages. More than 10 million children in low-income working families would be excluded entirely.  A family with two children that makes less than $16,333 would get no help from the House GOP CTC proposal. 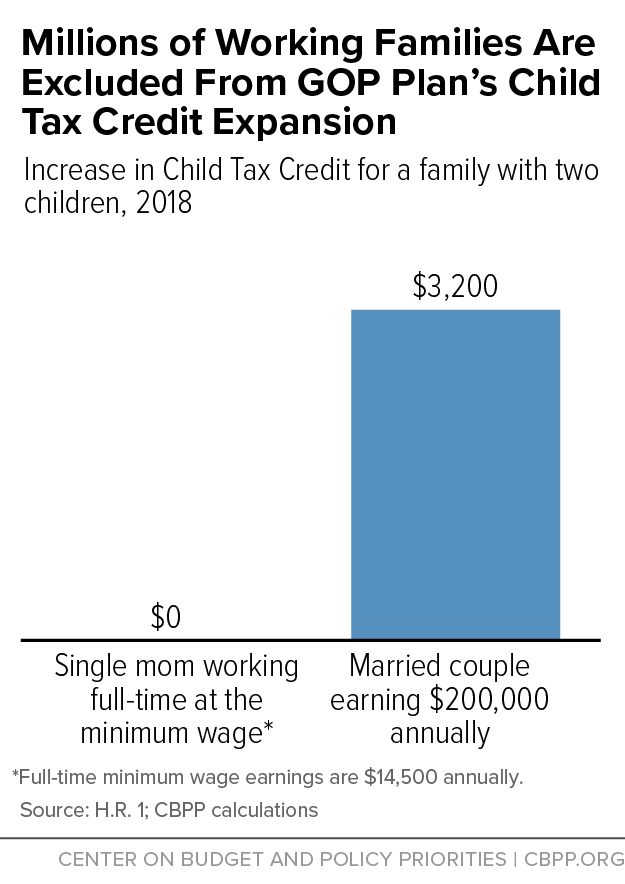 Consider a single mother of two children who works full-time at the minimum wage as a home health aide, earning $14,500.  She and her children would be entirely excluded under the House Republican plan.  Yet a couple with two children that makes $200,000, and thus doesn’t qualify for the CTC today, would receive a $3,200 CTC under the House plan (see chart).

The parents left out of the House bill’s CTC increase generally work at low-paying jobs, and the children in these families are the children who would benefit most the from a CTC increase.  Research finds that for many poor children, receiving income from refundable tax credits during childhood produces benefits at virtually every stage of life, including improved school performance, higher college enrollment, and increased work effort and earnings in adulthood.