The House plans to vote this week on another bill to make permanent a “tax extender” — a tax break that policymakers in recent years have extended for just a year or two at a time — and, like other such House legislation of recent weeks, do so in a fiscally irresponsible way.  Though the measure is designed to help small business and is, thus, politically popular, lawmakers should reject it. Specifically, the bill would make permanent a provision that allows small businesses to write off (or “expense”) the cost of certain investments, with an estimated price tag of more than $70 billion over ten years, according to the Joint Tax Committee.
Image 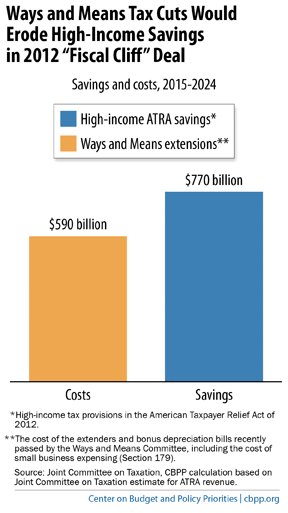 It’s the latest in a series of House tax bills that carry a significant fiscal cost.  The House Ways and Means Committee has voted to make permanent several provisions that, when you include the small business provision, carry a total cost of $590 billion.  If enacted, these bills would wipe out three-quarters of the deficit savings from the 2012 “fiscal cliff” agreement (see chart). The small business provision before the House is more generous and, thus, less well-targeted at small business than the one that House Ways and Means Committee Chairman Dave Camp (R-MI) included in his tax reform plan.  In the Camp plan, the amount of investment that small businesses could expense is lower. Specifically, the Camp plan sets the maximum expensing amount at $250,000, or half the amount as the current legislation.  Moreover, to better target the provision at small businesses, the Camp plan begins to phase out the expensing benefit for businesses with investments of $800,000, or less than half of the $2 million phase-out threshold in the bill before the House. Beyond eroding the fiscal cliff savings, this bill reflects the House’s fiscal double standard.  Policymakers insisted on offsetting the costs of partially easing the spending cuts of sequestration and avoiding drastic cuts in Medicare reimbursements for doctors.  For months, they’ve held up legislation to restore much-needed emergency unemployment benefits due to disagreements over how to offset the cost. The small business provision is popular.  But, if policymakers want to pass it, they can offset the costs by closing tax loopholes to pay for it.  That’s what Chairman Camp did when he made a similar provision part of his tax reform plan.  The House should fix the small business bill in this way or reject it as written.