Transportation infrastructure would face a new round of cuts under a funding bill the House is slated to vote on later today, our new paper explains.  Here’s the opening:

New cuts in Department of Transportation funding in the 2016 appropriations bill before the House would bring the total cut since 2010 to 30 percent, adjusted for inflation.  The bill illustrates the serious problems caused by the 2011 Budget Control Act’s (BCA) tight funding caps subsequently lowered by sequestration — and thus highlights the need for sequestration relief.

The Transportation Department portion of the bill, which funds aviation, passenger rail, and some mass transit (along with various smaller activities), cuts funding for these programs by $0.7 billion below the 2015 level, with most of the reductions occurring in infrastructure investments to improve the safety and efficiency of transportation systems and promote economic growth. . . .

These cuts to transportation programs are not a one-year phenomenon.  Rather, 2016 will be the sixth year of austerity in domestic appropriations, and the cumulative effects on transportation infrastructure are dramatic.  The Transportation Department programs funded through annual appropriations would be at their lowest in 14 years, adjusted for inflation.

Like the bill’s new cuts, the cumulative cuts since 2010 fall most heavily on capital investment programs in areas such as “TIGER” grants to states and localities to support infrastructure improvements, Amtrak and other rail programs, air traffic control systems, and mass transit (see graph).  This focus on cutting investment programs seems inevitable, given policymakers’ understandable decisions to target scarce funding under the tight budget caps to preserving basic operating and safety functions. 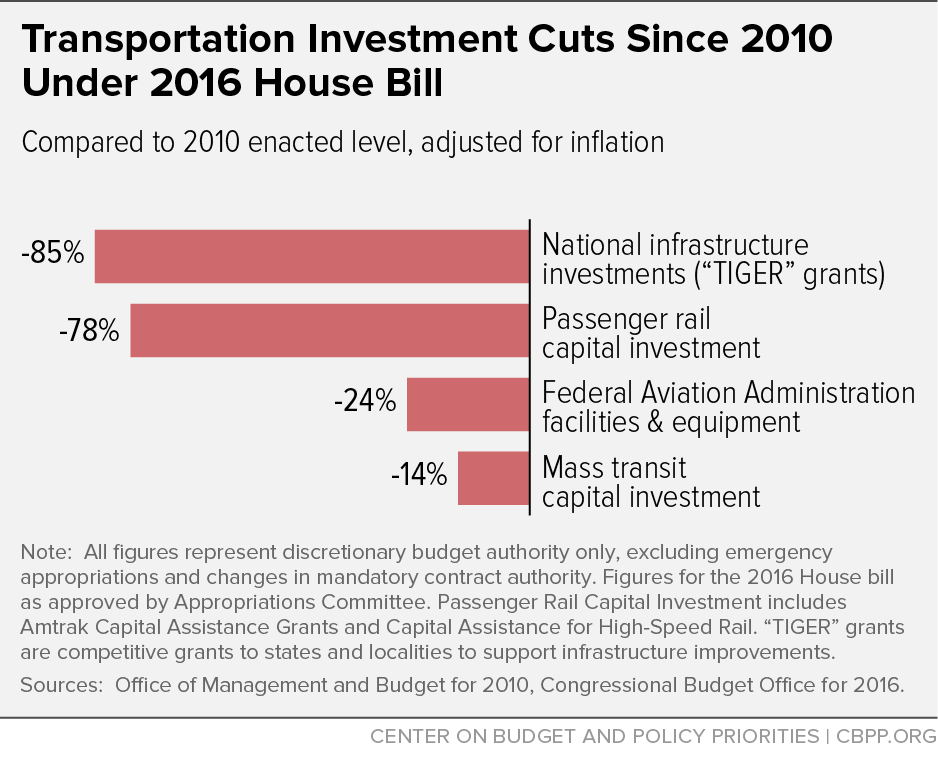