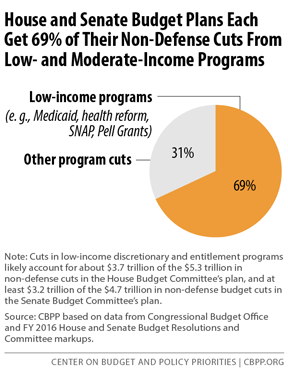 As members of the House and Senate tasked with resolving differences between the Senate and House budget plans prepare to meet today, they’ll discuss plans that are largely aligned — and similarly flawed.  As we explain in a new paper, the House and Senate plans have in common a number of serious flaws that likely will also apply to any final agreement.

Congressional Budget Roundup 2015: Everything You Need to Know About the House and Senate Budget Plans

March 27, 2015
PreviousIn Case You Missed It . . .
NextBudget Caps Too Tight for Adequate Rental Assistance
Stay up to date
Receive the latest news and reports from the Center